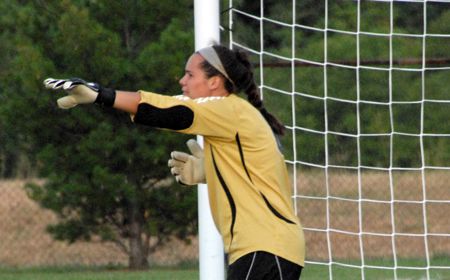 After 110 minutes of scoreless soccer in which Valparaiso outplayed Youngstown State and held a 29-6 advantage in shots, the Horizon League Championship first round match was decided in penalty kicks and the Crusaders came up on the short end as the Penguins advanced to the quarterfinals with a 5-4 victory.

Caitlin Lee fired the Penguins fifth attempt into the left corner of the goal past Valpo’s Mele Cabral (Boulder, Colo./Fairview H.S.) for the decisive tally in the shootout.

Valpo controlled the play throughout regulation, holding a 9-1 shot advantage in the first 45 minutes.  The Crusaders continued the run of play in the second half, with several chances to score.  Brooke Henderson (Westlake, Ohio/Westlake H.S.) hit the post in the 59th minute while Kendall Brown (Lake Zurich, Ill./Carmel Catholic H.S.) ricocheted a shot off of the crossbar with just over two minutes remaining in regulation.

The Crusaders had a 22-6 shot advantage throughout the first 90 minutes and continued the pressure in overtime.  Valpo had the only seven shot attempts in the extra sessions, forcing Nicole Kline to make three saves in the 20 minutes.  Kline made 12 total stops on the afternoon.

Nicole had a very nice day,” head coach John Marovich said afterwards.  “We put pressure on her throughout the match and she turned every shot away.”

Valpo also had all 13 corner kick opportunities in the match, but still was unable to convert offensively.

In the shootout, Laura Murphy (Aurora, Ill./Waubonsie Valley H.S.) found the right corner while Keeley Rice answered inside the left post for the Penguins.  Brown hit the post for Valpo on the Crusaders’ second attempt while Jordan Gapczynski gave Youngstown State the lead with her tally.  Jackie Thomas (Overland Park, Kan./Blue Valley Northwest H.S.) went to the left and scored for Valpo only to have Kelsey Kempton answer putting the ball into the left corner.  Jackie Kondratko (Granger, Ind./Penn H.S.) fired a rocket off of Kline’s hands into the goal to tie the shootout at three, but Lauren Brennan scored into the upper left corner as Youngstown State retook the lead.  The final round began with Dana McGlone (Littleton, Colo./Heritage H.S.) tying the score before Lee found the back of the net with the deciding tally.

Cabral made three saves for Valpo on her way to her 10th shutout of the season, a new school record both individually and for the entire Crusader team.

“This team has had to learn a lot the past month and a half, and we will turn it into something positive for sure,” concluded Marovich.

Valparaiso, the tournament’s eighth seed, sees its season end at 10-6-3 after the match officially goes down in the books as a draw while Youngstown State, the number nine seed, improves to 4-13-2 and advances to the quarterfinals on Sunday afternoon and will head to top-seeded Loyola (Chicago).

Match Notes: This was Valpo’s first home postseason match in program history … Valpo won its only previous shootout, 4-2, in the 1999 Mid-Continent Conference semifinal match against Oakland … Thomas started all 76 matches in her career, sixth most in school history … Cabral set the Crusaders’ single season goals against average at 0.71 … she also set the single season minutes played mark by a goalkeeper at 1782:50 … the 14 goals Valpo allowed this season was a new low for the program … Brown had six shots in the match and finished the season with 61, tied for fourth on the single season charts … her 224 career shots are second most in school history … Valpo is 7-0-1 now all-time against Youngstown State … this was Valpo’s third 0-0 draw of the season.