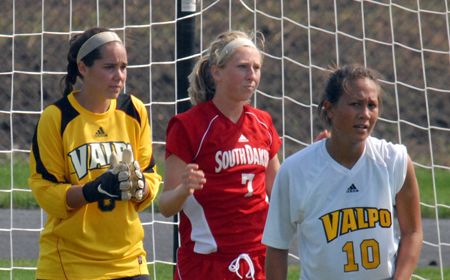 The regular season begins two days earlier, on August 21, when the Crusaders travel to Morehead State, a NCAA Tournament team from one year ago.  Valpo then entertains Michigan for the first time since 1995 and has a home match with Northern Illinois before playing four straight contests away from Eastgate Field.

Valpo will hit the road for non-conference tilts with IUPUI and Central Michigan sandwiched around the Boilermaker Tournament in which the Brown and Gold will face Ball State and host Purdue.

The Crusaders return to Eastgate Field following a three-week absence to entertain Liberty in the final tune-up prior to the start of Horizon League play.  Valpo and the Flames will be meeting on the pitch for the first time ever.

The eight-match Horizon League slate begins at Wright State on September 20 before the conference home opener against Green Bay five days later.  Valpo will also have visits from Milwaukee, Detroit, and Butler throughout the league season.

Valpo also has two more non-conference tilts sprinkled in among the league slate as Indiana State and IPFW both visit Eastgate Field.  IPFW rounds out the regular season on October 25 for Senior Day prior to the start of the Horizon League Championships which will take place November 1-8.