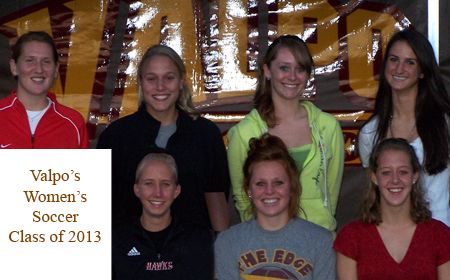 Valparaiso University’s head women’s soccer coach, John Marovich, has announced six signees that will join the squad in the fall of 2009. Joining the Crusaders are Marie Argo, Rachel DeFrank, Rachel Hoaglin, Rachel Spinelli, Catherine Terrell, and Trisha Wladecki. He also welcomes Janine Lytle, who has already joined the program at the beginning of the spring semester and will be considered a member of the 2009 freshmen class.

“Today, we are excited about the group that has accepted our invitation to be members of our Women’s Soccer Family,” said Marovich.  “This class represents the core values that we are looking for in student athletes.  All of these young ladies possess the competitiveness, commitment, discipline, and passion for the game of soccer that we believe is the core of success in the Horizon League.  We are very pleased to have again signed players from some of the top clubs in Michigan, Ohio, Minnesota and California.  I would like to thank my assistants, Heather Clark and Mia Moody, for all of the hard work put into this class.  Our student athletes benefit greatly from their commitment to the program.”

Marie Argo is a 5’7” midfielder from West Chester, Ohio. A defensive midfield player out of Cincinnati United Premier soccer club, Argo is a co-captain for her club team which has been a State Cup semi-finalist in 2006 and 2007.  Marie is a four-year starter at Lakota West High School while earning Academic All-Southwest Team honors the past three seasons.

“We are excited about Marie’s decision to attend Valparaiso University,” said Marovich.  “Each time we had the opportunity to see her play, Argo’s performance increased. I believe this has to do with her character and work ethic, not to mention the quality environment she participated in with her club team and Coach Deutsch.  She will provide a heading presence and be another player that can strike a ball for distance on goal.  It was great to get to know her coaches during the process and we look forward to the opportunity to work with her over the next four years.”

Why Valpo for Argo?:  “I chose Valpo because it gives me the unique opportunity to grow, not only as an athlete, but as a student. The coaches genuinely care about helping each and every player to be successful on and off the field. Everything that Valpo has to offer - the education, the coaching staff, the soccer program, and the campus just seemed to be what I was looking for.”

Rachel DeFrank is a 5’7” goalkeeper from Mason, Ohio.  DeFrank, a two-year letter-winner at Mason High School, led the Comets to a conference championship and district runner-up finish by ending the season with 13 shutouts which placed her second in the city for shutouts.  She is also a three-year letterwinner in track. DeFrank also patrols the goal for her Warren County United club team.

“It has been a pleasure to get to know Rachel,” said Marovich.”  “While I was visiting family in Cincinnati, I stopped out at a local tournament and was impressed with Rachel’s athleticism and tenacity in the goal.  Her desire to achieve and compete really has my staff and I excited about her decision to attend Valpo. We believe that she will fit into our soccer family very well after having the opportunity to meet and spend some time with her family. I am looking forward to working with Rachel and helping her accomplish her goals on the field and in the classroom.”

Why Valpo for DeFrank?: “Of all the colleges I visited Valparaiso just seemed like the right fit for me.  I fell in love with its beautiful campus and was impressed with the small school feel for a D1 university. Coach Marovich and the team really made me feel welcome and I'm excited to be a part of a great program.”

Rachel Hoaglin is a 5’7” midfielder from Lakeville, Minn.  A versatile midfield player out of the Minnesota ThunderElite Academy (formerly Bangu Tsunami), Hoaglin is a seven-year member of the Minnesota ODP State Team and a finalist for Minnesota’s Ms. Soccer.  Rachel helped lead her academy team to five Minnesota State Cup Championships, a US Youth Soccer Region II semifinal, a US Club Soccer Region Championship and a consistent ranking in the top 25 club teams in the country.  She was a four-year starter and two-year captain of her Academy of Holy Angels High School team, leading them to a second place finish in the state tournament her senior year while earning All-Tournament Team accolades and leading the state in assists.  Hoaglin was a four-time All-Academic honoree, three-time All-Conference recipient, and a two-time All-State selection.

“The Crusader soccer program has received a commitment from Rachel which means we get to spend four years working with an outstanding individual, student, and one of the top players in the state of Minnesota,” said Marovich.  “We have had several players from Minnesota and believe she will continue the tradition of success of Valpo athletes from the North Star State.  I was so impressed with Rachel’s field vision, competitiveness and leadership while watching her play for the Thunder.  Her soccer knowledge will help her make a sound transition into the college game.  These qualities were learned from the many years of ODP but most importantly the everyday training environment with Coach Danny Storlien.  We are thrilled that Rachel and her family are joining the Crusader Soccer Family.”

Why Valpo for Hoaglin?: “I chose Valparaiso due to the perfect campus setting, challenging academics and Division One athletics that fit together; making for what I believe will be the best collegiate experience. Most importantly, the soccer program, including the coaching staff and players, makes Valparaiso seem not only like a college but a home; with this family, I feel I will be able to learn, accomplish goals, and grow as a person.”

“I first got to know Janine at our Summer VIP camp this past year,” said Marovich.”  “She showed a great deal of commitment and competitiveness by wanting to finish first in every activity and competition. This mentality along with her ability to defend, get forward into the attack and be goal dangerous made her a player that we wanted to be part of our program.  I had the opportunity to meet and talk with her grandmother who is a Valpo alumnus and I knew immediately Janine would be an outstanding fit to our program.”

Why Valpo for Lytle?:  “I chose Valpo because I loved the campus and how much I felt at home when I was here visiting. I really enjoyed how small the classes were even though it is a Division One school. When I saw the schedule for the Valparaiso's women’s soccer team I knew how competitive they were and that I knew I wanted to be a part of it.”

Rachel Spinelli is a 5’7” defender from Carmichael, Calif.  A central defender for the San Juan Spirits (ranked as the 10th best club in the country by Soccer America), Spinelli is a two-year captain for the Spirits helping her team to two Cal North State Cup quarterfinals as well as become a finalist for the 2007 US Club Championship.  Due to her club commitment, Rachel played for Rio Americano High School’s soccer team and led them to a Division III section final in 2006 and a Division III section championship in 2007 (section championship is the highest level in California as there is no state championship).

“I first heard of Spinelli from a great friend of mine in California, club coach John Demartini,” said Marovich.  “I soon had the opportunity to watch her compete and talk with her.  She is an outstanding center back who organizes her back line.  Rachel’s composure on and off the ball in the back will be an asset to our program next season.  We are excited to have another player in this class that has played at the top level of club soccer and brings those experiences to Valpo enabling us to continue growing our success. Her ability to communicate with her teammates was evident in the recruiting process.  I have Rachel to thank for the increased diversity of my playlist on my Ipod as she shared her favorite music interests with me.”

Why Valpo for Spinelli?:  “When I was looking for a college, I wanted to find a university where I could get a great education and play great soccer.  I looked at a number of schools.  Once I met Coach Marovich and learned about his program at Valpo, I knew this was where I wanted to go.  Valpo has the perfect blend of education and soccer.  Coach Marovich is passionate about the game I love to play.”

“Catherine stood out at the various ODP and club events in which I had an opportunity to see her compete,” said Marovich.  “She has an ability to score from distance and cause problems for defenders with her defensive pressure.  Terrell has been effective in all levels of competition and we look forward to her making this same contribution to our program in the fall.  I enjoyed learning about Catherine’s desire to be a nurse.  She is going to be a success not only on the soccer field but as a student in our nursing program.  With Terrell’s commitment today, I feel we have added an amazing competitor which will assist in increasing our scoring in the fall.”

Why Valpo for Terrell?: “I chose Valpo as my soccer destination because it is the perfect fit between soccer and academics.  The coaching philosophy, I believe will help me not only in soccer but life as well.  Valpo will help me further my soccer career but ultimately give me the opportunity to receive my degree in nursing.”

Trisha Wladecki is a 5’4” Midfielder from Avon Lake, Ohio.  An attacking midfield player out of the Cleveland United Soccer Club, Wladecki is an Ohio North ODP State Team participant since 2004 and has represented Ohio North on a soccer tour of England. She captained her Cleveland United team to State Cup Finalist the last three years.  While playing for Avon Lake High School, Wladecki was named Second Team All-Ohio, First Team Greater Cleveland and First Team All-Southwest Conference in 2008 while also collecting county and conference MVP honors.

Wladecki not only has garnered recognition athletically but was named an NSCAA High School Academic All-American. She intends to get into the medical field and is looking forward to enrolling into the pre-med program. A high school highlight was her participation with the Avon Lake Chorale and performing at Carnegie Hall and the Festival of Gold in Chicago.

“Trisha is going to add a tremendous attacking mentality to our program, not to mention her personality on set pieces will increase our effectiveness in the fall,” said Marovich.  “During the recruiting process, I got to know Trisha very well and believe we are getting an outstanding individual who has a wonderful competitive spirit.  We look forward to working with her in a few months and helping her achieve the high expectations she has for herself.”

Why Valpo for Wladecki?: “I chose Valpo because it is a strong academic university.  Valparaiso had the correct balance of academic, athletics, and the correct social atmosphere I was looking for in a college.  John Marovich was a big part of my decision; he was the kind of coach I was looking for, and I am excited to be coached by him in the near future.”