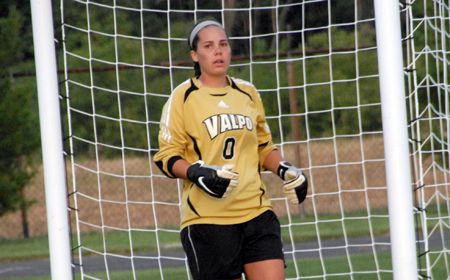 Mele Cabral is one of Valpo's tri-captains in 2009. (Ray Acevedo)
Related Links

This Week in Crusader Soccer: Valparaiso begins the 17th season of women’s soccer action on Friday evening as the Crusaders travel to Morehead, Ky. to battle Morehead State.  Two days later the Brown and Gold will host Michigan for the Crusaders’ home opener, marking the first time since 2000 when Purdue visited Valpo that a Big Ten opponent will make an appearance at Eastgate Field.

Head Coach John Marovich: John Marovich is 10-6-3 in his second season overall and with Valpo.  Just the third coach in program history, he has moved into second place all-time in victories for the Crusaders.

Series Notes: Valparaiso and Morehead State are meeting for the first time ever on the pitch.  Michigan holds a 3-0 all-time advantage against the Crusaders, but the two schools have not met since November 3, 1996 when the Wolverines posted a 7-0 victory in Ann Arbor, Mich.  This will be Michigan’s second appearance at Eastgate Field, having won 3-0 during the 1995 season.

Upcoming Promotions: On Sunday against Michigan, the team will be signing autographs following the match for all fans in attendance.  In addition, the first 25 students showing valid ID will receive a free Crusader soccer t-shirt.  A season-long punch card promotion will also take place for Valpo students in attendance.

Wrapping Up Preseason Action: Valparaiso battled another Big Ten opponent, Indiana, to a 1-1 draw on Saturday evening (Aug. 15) in Bloomington, Ind. to close out the preseason portion of training camp.  Jackie Kondratko scored with 16 minutes remaining to put the Crusaders on top, but the Hoosiers knotted the match in the final six minutes on a goal by Natalie O’Bryan.  Mele Cabral made two saves in 61 minutes of play in goal for Valpo while Rachel DeFrank came in during the second half to make three stops.

Scouting Morehead State: The Eagles return 21 letterwinners from last year’s squad which went 9-9-3 overall and won the Ohio Valley Conference Tournament to earn a berth in the NCAA Tournament.  The Eagles were picked second in the OVC this season and are led by reigning OVC co-Offensive Player of the Year and Freshman of the Year Jillian Birchmeier.

Scouting Michigan: The Wolverines return 13 letterwinners from last year’s team that finished 4-10-5 overall and placed 11th in the Big Ten.  Michigan was picked to finish in the same position again this year in the preseason poll.  Junior Amanda Bowery leads the Wolverine returnees after scoring seven goals and tallying 17 points a year ago.

Valpo in Season Openers: After dropping the season opener in each of the first 12 years of the program’s history, Valpo has won the last four openers following a 1-0 victory over Ball State last year at Eastgate Field.  This will be the first time the Crusaders have opened on the road since a 2-1 overtime win at Indiana State to kick off the 2006 campaign.

Home Openers: Valpo is 4-12 all-time in home openers at Eastgate Field, but has won two straight.  In addition to downing Ball State last year, Valpo opened the 2007 season with a 2-0 triumph over Murray State in 2007.

Team Captains: Valpo will have tri-captains for the 2009 season.  Seniors Mele Cabral and Jackie Kondratko will join sophomore Tracy Roos in assuming the role this year.

Roos and Cabral Look to Lead Valpo in 2009: Sophomore Tracy Roos returns to the lineup for 2009 after being named to the Horizon League’s All-Newcomer Team a year ago while senior goalkeeper Mele Cabral set a new school record with 10 shutouts in 2008.