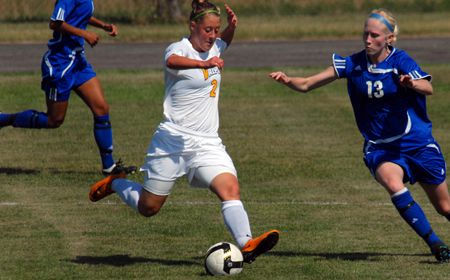 Valparaiso jumped on top early on Friday evening, but Morehead State tied the match in the second half and scored the match-winner with 2:46 remaining in the first overtime to give the Eagles a 2-1 victory over the Crusaders at Jayne Stadium in Morehead, Ky. in the season opener for both schools.

The Crusaders wasted little time jumping on the scoreboard in the new season, getting an early contribution from a freshman.  Trisha Wladecki (Avon Lake, Ohio/Avon Lake H.S.) received a cross in the middle of the box from senior captain Jackie Kondratko (Granger, Ind./Penn H.S.) and beat goalkeeper Lily Meisner to put the Brown and Gold on top just 11:46 into the contest.

Valpo controlled play for most of the first half, outshooting the hosts 8-2 in the first 45 minutes.  Another freshman, Luisa Desario (Bartlett, Ill./Bartlett H.S.) had two great chances to add to the lead before the break, ricocheting two shots off of the crossbar in a five-minute span late in the stanza.

“We dealt with the long service by being dominant in the air tonight, and I thought we solved their pressure by finding the midfield which allowed us to get out,” said head coach John Marovich.

Coming out of halftime, seemed to maintain the intensity for the first 15 minutes before Devan Jordan tied the match at one with a breakaway goal for Morehead State.  The two schools remained deadlocked the rest of the half, forcing the first overtime match in a season opener in the 17-year history of the Valpo soccer program.

In the overtime, Jordan again broke free and pushed the ball past Crusader netminder Mele Cabral (Boulder, Colo./Fairview H.S.) for the winning tally.

Despite the outcome, the Crusaders doubled Morehead State (1-0) up in shot attempts, 16-8.  Both Cabral and Meisner made two saves each for their team.

“We had several good performances from several players on the field,” Marovich said afterwards.  “As we are putting this group together we see a lot of positive things. We might be a little off in our timing but overall the ideas were very good.  The experience we are gaining will help us as we move into the latter part of the season.”

Valparaiso (0-1) will head home to Eastgate Field on Sunday evening for a 5 p.m. showdown with Michigan  The match will be carried live on WVUR (95.1-FM, Valparaiso) and online at www.valpoathletics.com. in the Crusaders’ home opener.

Match Notes: The loss snapped a string of four consecutive season-opening victories for the Crusaders … August 21 marks the earliest start to a season in program history … Morehead State was a NCAA Tournament participant one year ago.