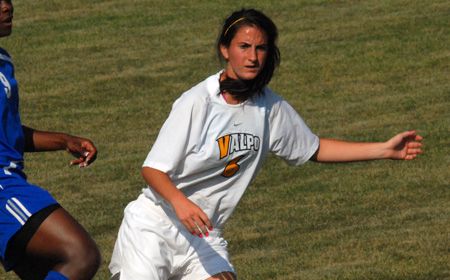 For the second straight match Valparaiso battled until the very end, but on Sunday evening Kristen Goncalves scored with just 1:16 left in regulation to lift Michigan to a 2-1 victory over the Crusaders in front of a large crowd at Eastgate Field.

Goncalves took a long ball from Amanda Bowery on the other side of midfield and took advantage of a Crusader defender slipping and falling, then beat goalkeeper Mele Cabral (Boulder, Colo./Fairview H.S.) one-on-one for the match-winning tally.

The Crusaders scored quickly to open the match for the second straight contest, giving the fans at Eastgate Field something to cheer about.  Jessie White (Buffalo Grove, Ill./Buffalo Grove H.S.) won the end line to the left of the Wolverine goal and sent a cross to the far side where freshman Rachel Hoaglin (Lakeville, Minn./Academy of Holy Angels H.S.) raced in and headed the ball past Kristen Keane to give Valpo a 1-0 lead just 6:04 into the contest.

“That was just a fantastic goal,” head coach John Marovich said afterwards.  “Hats off to Rachel.  That’s a fantastic way to get your first college goal.”

Michigan (1-1) tied the match at the 21:59 mark of the first half scoring on an own goal.  Amanda Bowery sent a free kick into the center of the box which a Crusader defender tried to head away, but unfortunately for the Brown and Gold, it deflected into the back of the goal instead, knotting the score at one.

In an evenly matched first half, the Crusaders went into intermission holding a 6-5 advantage on shot attempts.

In the second half, the Wolverines had more of the possession and scoring opportunities, but the Valpo defense held strong.  Cabral made two of her three saves for the match in the final 45 minutes, but Goncalves took advantage late to score the match-winning goal.

Michigan ended up with a 13-8 advantage in shot attempts, but just a 5-4 edge on goal.  Keane made three stops as well for the visiting Wolverines.

“I want to personally thank everyone that came out to support us today,” Marovich concluded with.  “The crowd was incredible and we fed off of it.  We definitely gave them something to cheer about with a great goal in the first half.”

Valparaiso (0-2) will look to bounce back on Friday evening as the Crusaders close out the two-match homestand at Eastgate Field with a 4 p.m. contest against Northern Illinois.  The match will be carried live on WVUR (95.1-FM, Valparaiso) and online at www.valpoathletics.com.

Match Notes: Michigan was the first Big Ten team to visit Eastgate Field since Purdue in 2000 … the loss snapped Valpo’s streak of winning two consecutive home openers … Hoaglin’s goal was her first collegiate tally … White’s assist was the seventh of her career, just one shy of moving into the top-10 all-time at Valpo in helpers … it was also White’s 21st career point … freshman Luisa Desario (Bartlett, Ill./Bartlett H.S.) made her first collegiate start.