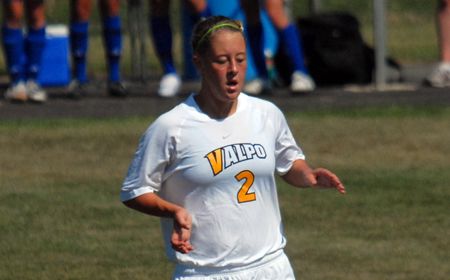 This Week in Crusader Soccer: Valparaiso wraps up a brief two-match homestand on Friday afternoon when the Crusaders host Northern Illinois at Eastgate Field.  The Brown and Gold then embarks on a four-match road trip beginning on Sunday afternoon against instate rival IUPUI down in Indianapolis, Ind.

Head Coach John Marovich: John Marovich is 10-8-3 in his second season overall and with Valpo.  Just the third coach in program history, he has moved into second place all-time in victories for the Crusaders.

Series Notes: Valparaiso and Northern Illinois are meeting for the eighth time with the Huskies holding a 6-0-1 advantage in the all-time series.  Last year the Crusaders earned their first result ever against the Huskies, a 0-0 double-overtime draw in DeKalb, Ill.  Valpo holds a 7-3-1 advantage all-time against IUPUI.  The two former Mid-Continent Conference rivals have met every season since 1998 with the Crusaders having won the last four meetings between the two schools, including a 1-0 victory in double overtime last year in Valparaiso.

Wrapping Up Last Week’s Action: Valpo scored less than 12 minutes into the season last Friday night at Morehead State on a Trisha Wladecki goal, but the Eagles tied the contest in the second half and earned a 2-1 victory in overtime.  Rachel Hoaglin scored on a header just 6:04 into Sunday’s contest against Michigan, but the Wolverines scored the match-winner with 1:16 to play in regulation in 2-1 decision at Eastgate Field in the Crusaders’ home opener.

Scouting Northern Illinois: The Huskies are opening their 2009 season on Friday in Valpo.  Northern Illinois finished 9-6-5 overall in 2008, finishing sixth in the Mid-American Conference and returns 17 letterwinners, including eight staters from last year’s squad.  The Huskies were tabbed to finish seventh in the MAC in this year’s preseason poll.

Scouting IUPUI: The Jaguars opened their season last Friday with a 2-0 loss at home against Eastern Illinois.  IUPUI, co-champions in the Summit League a year ago, return 20 letterwinners, including 10 starters, this season, and was picked to finish third in the conference this season.  Alicia Brock is the team’s top scorer from 2008 while Jamie Farrell returns in goal.

Making Her Mark Early: Freshman Trisha Wladecki needed just 11:49 of collegiate soccer before she scored her first goal wearing the Brown and Gold.  She took a cross from Jackie Kondratko in the middle of the box to put Valpo on top of Morehead State 1-0.  The rookie forward tallied 93 points at Avon Lake High School during her prep career, fourth most in school history.

White Nearing the Top-10: With her assist against Michigan on the Rachel Hoaglin goal, Jessie White tallied her seventh career helper.  The senior needs just one more to move into a tie for ninth place on Valpo’s career assist list.  White also now has 21 career points, just two shy of ninth place on that list as well.

Keep On Shooting: Luisa Desario fired 11 shot attempts in the first two matches for the Brown and Gold, including seven in the opener at Morehead State.  She led the Horizon League in shots through the opening weekend.

Team Captains: Valpo will have tri-captains for the 2009 season.  Seniors Mele Cabral and Jackie Kondratko will join sophomore Tracy Roos in assuming the role this year.