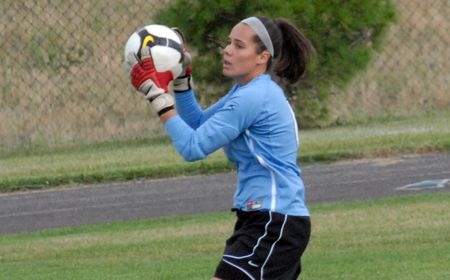 For the second straight match Valparaiso surrendered an own goal, and that proved to be the difference on Friday evening as the Crusaders dropped a 1-0 decision to Northern Illinois at Brown Field.

Kelsey Passaglia served a long ball into the box just 3:59 into the contest which a Crusader defender went to head away, but unfortunately for the Brown and Gold, found its way into the back of the goal for the lone tally of the afternoon.

The visiting Huskies controlled the run of play in the first half, outshooting Valpo 9-5, including forcing Valpo netminder Mele Cabral (Boulder, Colo./Fairview H.S.) to make all three saves on the day in the first 45 minutes.  Northern Illinois also had four corner kick opportunities to the Crusaders’ one, but were not able to add to the lead.

“In the first half we didn’t perform at a level in which we had during the first two matches,” head coach John Marovich said.  “We really didn’t give anything away though.  In the second half we played better and had more chances.”

Valpo outshot Northern Illinois (1-0) 6-3 during the second half, and had a pair of corner kick opportunities, which nearly led to the equalizer.  With about 35 minutes remaining, Rachel Hoaglin (Lakeville, Minn./Academy of Holy Angels H.S.) bent a corner that ricocheted off of the far post but stayed out of the goal.

The Crusaders closed the final shot margin to one, 12-11 in favor of the Huskies and forced Lindsey Curnock to make a pair of saves in goal.

“We have to take more chances,” Marovich said.  “We are going to be tested mentally now and just need to fight through it.”

Valparaiso (0-3) will look for its first victory of the season on Sunday afternoon in Indianapolis, Ind. when the Crusaders battle IUPUI.  Kickoff is set for 12 p.m. CDT.

Match Notes: The match was moved to Brown Field as Eastgate Field was unplayable due to heavy rains over the past two days in Northwest Indiana … Valpo is now 1-1 all-time at Brown Field .. Cabral played all 90 minutes and has played the last 2060:14 straight in goal for the Crusaders over the past two seasons … she has now qualified for the all-time goals against list, and is Valpo’s all-time leader with a 0.67 GAA for her career … Luisa Desario (Bartlett, Ill./Bartlett H.S.), who led the Horizon League in shot attempts on the year, had a team-leading three against NIU … the Huskies lead the all-time series 7-0-1.