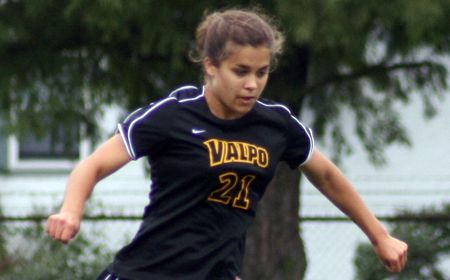 Kondratko’s goal was her first of the season and seventh of her career for the senior captain.  She led the Crusaders with four shot attempts on the afternoon, including two on goal.

The penalty kick was set up as Tracy Roos (Centennial, Colo./Cherry Creek H.S.) served the ball into the box to Tricia Wladecki (Avon Lake, Ohio/Avon Lake H.S.), who was hauled down by a Jaguar defender.

“I’m proud of this group because on the road as the game goes later and later in a 0-0 tie, the game becomes more stressful,” head coach John Marovich said afterwards.  “We stuck with it and maintained our composure very well.  Hopefully this win will help take the stress off of our players.”

Valpo outshot the Jaguars 10-8 for the match, but IUPUI held a 4-2 advantage in shots on goal.  The Crusaders also had a 4-3 edge in corner kick opportunities.

“I thought we moved the ball well today and had a good mixture of being both direct and indirect with our play,” added Marovich.

Mele Cabral (Boulder, Colo./Fairview H.S.) made three saves on the afternoon for her first shutout of the season, and 13th of her career, second most in school history.

Jamie Farrell made one save for IUPUI (0-2) in the loss.

Valparaiso (1-3) will continue its four-match road trip on Thursday afternoon when the Crusaders head to West Lafayette, Ind. for the first day of the Boilermaker Challenge Cup.  Valpo will face Ball State in a 4:30 p.m. CDT contest in a match that will be carried live on WVUR (95.1-FM, Valparaiso) and online at www.valpoathletics.com.

Match Notes: Kondratko’s goal was the third match-winner of her career, moving her into a tie for ninth place on Valpo’s all-time list … Valpo leads the all-time series with IUPUI 8-3-1 and have won five straight matches against their former Mid-Continent Conference foe.