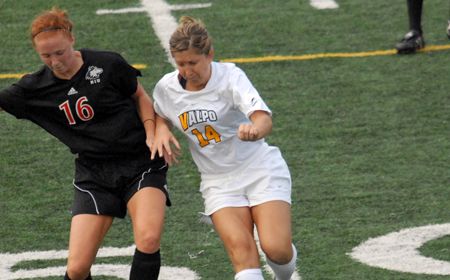 This Week in Crusader Soccer: After splitting a pair of matches at last weekend’s Boilermaker Challenge, Valparaiso returns to action for just one match this week.  The Crusaders will wrap up a four-match road trip in Mount Pleasant, Mich. taking on Central Michigan.

Head Coach John Marovich: John Marovich is 12-10-3 in his second season overall and with Valpo.  Just the third coach in program history, he has moved into second place all-time in victories for the Crusaders.

Series Notes: Valparaiso and Central Michigan are meeting for the sixth time with the Chippewas holding a 3-2 advantage.  Last year the Crusaders won 1-0 on September 19 at Eastgate Field.  Central Michigan is 2-0 against Valpo in Mount Pleasant, Mich., including a 2-1 win on August 28, 2005, the last time the Crusaders made the trip north.

Wrapping Up Last Week’s Action: Valparaiso went 1-1 at the Boilermaker Challenge last week.  On Thursday the Crusaders posted a 3-2 victory over Ball State for their second straight win.  Luisa Desario scored her first two collegiate goals while Rachel Hoaglin added the match-winner with under 14 minutes remaining.  In Saturday’s contest against #14 Purdue, the Crusaders battled throughout before dropping a 1-0 decision to the host Boilermakers.  Mele Cabral made 15 stops in the loss for Valpo.

Scouting Central Michigan: The Chippewas are looking to snap a three-match losing streak after playing three straight Big Ten opponents.  Central Michigan dropped its last match 4-0 at Michigan State on Sunday in East Lansing, Mich.  Laura Twidle leads the Chippewas in scoring with three goals and six points while Bailey Brandon has added three points.  Shay Mannino has posted a 1.79 goals against average in goal for the Chippewas.

Desario Named Player of the Week: Freshman Luisa Desario became the first Crusader to earn Horizon League Player of the Week honors in women’s soccer since the Brown and Gold joined the conference.  Desario had two goals on the week against Ball State and ranks among the top-10 in the conference this year in goals (two), points (six), and shots (17) three weeks into the season.

Freshmen Making Their Mark: Five of Valpo’s six goals this season have come off the foot of freshmen.  Luisa Desario and Rachel Hoaglin each have two goals, while Trisha Wladecki has added a marker as well for the Brown and Gold.  In total, the freshmen have accounted for 11 of the team’s 18 points on the year.

Cabral Has Career Night in Goal: Senior goalkeeper Mele Cabral made a career-best 15 saves on 16 shots Saturday evening against Purdue.  Prior to the match, Cabral had a previous career high of seven saves last season at Colorado College.

Cabral All-Time Goals Against Average Leader: Mele Cabral qualified for Valpo’s all-time goals against average list earlier this season when she surpassed 2,500 career minutes in goal.  The senior’s 0.78 career mark moved her in front of Erin Murray (2004-2007) for the top spot.  Murray previously held the record with a 1.19 career goals against mark.

Lots of Shots: Sarah Jewell and Jackie Kondratko both rank among the top-10 in school history in shot attempts.  Jewell has 88 shot attempts in her four years with the Brown and Gold, ranking eighth all-time, just four behind Erin Crowgey (1997-2000) for seventh place on the career charts.  Kondratko just broke into the top-10 last weekend, and is ninth overall, two shots behind Jewell with 86.