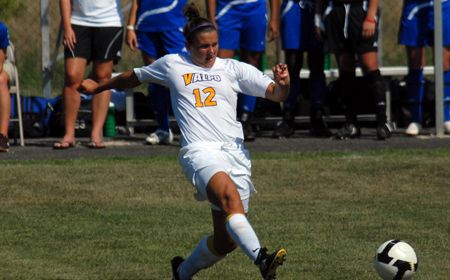 This Week in Crusader Soccer: After a week off, Valparaiso returns to the pitch this weekend for a pair of matches, beginning Friday against Liberty at Eastgate Field as the Crusaders play their final tune-up before conference play. On Sunday, the Crusaders open their third Horizon League season in Dayton, Ohio battling Wright State.

Upcoming Promotions: Friday’s match with Liberty is the Fraternity/Sorority Challenge.  Campus fraternities and sororities will be competing with one another to see which organization can bring the most fans to the match.  In addition, an autograph session with the Crusaders will be held for all fans following the match.

Head Coach John Marovich: John Marovich is 12-11-3 in his second season overall and with Valpo.  Just the third coach in program history, he has moved into second place all-time in victories for the Crusaders.

Wrapping Up Last Week’s Action: Central Michigan scored with just 8:30 remaining in regulation on Friday afternoon as the Chippewas defeated the Crusaders 1-0 in Mount Pleasant, Mich.  A turnover led to Laura Twindle’s match-winner.  Mele Cabral made six saves in the loss for the Crusaders.

Scouting Liberty: The Flames visit Eastgate Field looking to snap a three-match losing skid following a 1-0 setback at Navy on Sunday.  Madison Short has scored two of Liberty’s three goals on the year, while in goal, Karen Blocker has played all 450 minutes, sporting a 2.60 goals against average.

Scouting Wright State: The Raiders enter the week on a four-match unbeaten streak following a scoreless draw at Dayton on Sunday.  Wright State hosts Western Michigan on Friday.  Brittany Persaud leads the team with two goals and five points offensively while Meghan Hackerson has played every minute in goal, posting a 0.92 goals against average.

Valpo Looks for First Horizon League Opening Win: The match at Wright State marks the beginning of Valpo’s third Horizon League season.  The Crusaders are looking for their first win in a Horizon League opener, having fallen to Butler 2-0 in each of the last two years.

An Early Start to the League Season: Valpo and Wright State are the only Horizon League teams to play this weekend.  The Raiders opened conference play back on September 6 hosting Loyola, but this is the opener for the Crusaders.  All of the other league teams will begin conference play later in September.

Pencil Them in the Lineup: Head coach John Marovich has used the same starting 11 for every match this season with the exception of the opener at Morehead State.  In that contest, Catherine Terrell started in place of Luisa Desario.

Truly a Mainstay: Mele Cabral continues her string of matches between the posts.  The senior goalkeeper has played every minute of every contest the last two seasons, all 26, for a total of 2867:35 consecutive minutes for the Brown and Gold.

Cabral All-Time Goals Against Average Leader: Mele Cabral qualified for Valpo’s all-time goals against average list earlier this season when she surpassed 2,500 career minutes in goal.  The senior’s 0.78 career mark moved her in front of Erin Murray (2004-2007) for the top spot.  Murray previously held the record with a 1.19 career goals against mark.

Lots of Shots: Sarah Jewell and Jackie Kondratko both rank among the top-10 in school history in shot attempts.  Jewell has 88 shots in her four years with Valpo, ranking eighth all-time, just four behind Erin Crowgey (1997-2000) for seventh place on the career chart.  Kondratko broke into the top-10 this season, and is now ninth, two shots behind Jewell, with 86.

The Halfway Point: Sunday’s match will mark the midway point in the regular season, as the Crusaders will have just nine contests remaining after playing Wright State.