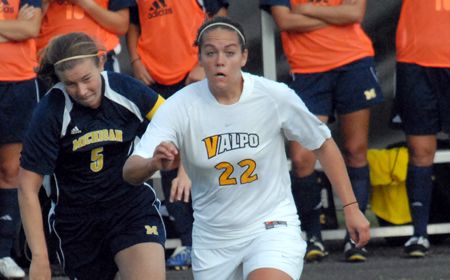 Brooke Henderson’s (Westlake, Ohio/Westlake H.S.) first collegiate goal proved to be the difference in the match for Valparaiso on Friday afternoon as the Crusaders topped Liberty 1-0 at Eastgate Field.

With the Crusaders controlling play throughout most of the match, Rachel Hoaglin (Lakeville, Minn./Academy of Holy Angels H.S.) found the sophomore’s head in the middle of the goal box off of a corner kick and Henderson beat Flames’ goalkeeper Karen Blocker 23:47 into the first half. For Hoaglin, a freshman, it was her first career point.

Valpo controlled the play on the offensive end for a majority of the contest, outshooting Liberty 7-2 in the first 45 minutes of play.  Blocker made all four of her saves in the first half to keep the Flames in the match, as Valpo earned six corner kicks in the stanza as well.

Luisa Desario (Bartlett, Ill./Bartlett H.S.) and Jessie White (Buffalo Grove, Ill./Buffalo Grove H.S.) each had solid opportunities early in the half for the Crusaders, only to be turned aside by Blocker.

Leading 1-0 at halftime, the Crusaders took care of the possession in the second half, outshooting Liberty (1-5) by a final margin of 12-6.  Valpo earned four more corner kicks, and Mele Cabral (Boulder, Colo./Fairview H.S.) made three of her five stops in the second half to preserve her second shutout of the season.  Valpo finished with a 10-1 advantage in corner kick opportunities.

“I like the way we killed the game in the second half,” Marovich added.  “We played smart and intelligent, and while we tried to score a second goal, we didn’t allow ourselves to make a mistake.”

Valparaiso (3-5) will now enter Horizon League action on Sunday afternoon as the Crusaders head to Dayton, Ohio to battle Wright State in a 12 p.m. CDT contest.

Match Notes: This was the first meeting ever between Valpo and Liberty, and the Crusaders’ first contest ever against a Big South foe … Henderson’s goal also marked her first two career points for the Brown and Gold … Hoaglin now is tied for the team lead with five points this year … Jackie Kondratko (Granger, Ind./Penn H.S.) had two shots in the match and is now tied with Sarah Jewell (Kansas City, Mo./Park Hill H.S.) for eighth on the career list with 88 … Cabral’s shutout is the 14th of her career … Laura Romberg (Vernon Hills, Ill./Vernon Hills H.S.) earned her first start of the season in the midfield.