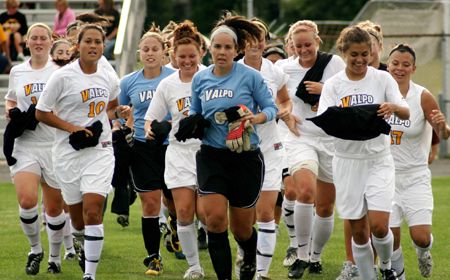 This Week in Crusader Soccer: Valparaiso moves into the heart of Horizon League play this weekend with a pair of key matches against conference foes.  Friday the Crusaders return to Eastgate Field to host Green Bay before heading to the Windy City on Sunday evening for a match at Loyola.

Upcoming Promotions: Friday is Military Day at Eastgate Field.  All military personnel will receive free admission with their ID.  The Army National Guard will have jousting available for all fans to participate at Eastgate Field.

Head Coach John Marovich: John Marovich is 13-12-3 in his second season overall and with Valpo.  Just the third coach in program history, he has moved into second place all-time in victories for the Crusaders.

Series Notes: Valparaiso and Green Bay are meeting for the 11th time with the Phoenix holding a 8-1-1 series advantage.  The Crusaders have earned their two results against Green Bay in the last two meetings, playing to a 0-0 draw last year in Wisconsin after downing the Phoenix 3-1 at Eastgate Field in 2007.  Valpo is 1-4 against Green Bay at home.  The Crusaders and Loyola are meeting for the 17th time with the Ramblers holding a 12-4 advantage.  Loyola is the only opponent Valpo has played in each of the 17 seasons of soccer the Crusaders have played.  The Ramblers have won seven straight meetings, including a 1-0 victory at Eastgate Field last year.  Loyola holds a 5-3 series edge at the Loyola Soccer Park.

Wrapping Up Last Week’s Action: Brooke Henderson headed home a Rachel Hoaglin corner kick in the 24th minute for the only goal of the match on Friday as Valpo defeated Liberty 1-0 at Eastgate Field.  Mele Cabral made five saves for her second shutout of the season.  On Sunday, Wright State scored twice during a two-and-a-half minute span in the second half on the way to posting a 3-0 victory in Valpo’s Horizon League opener.

Scouting Green Bay: The Phoenix enter the contest having played back-to-back draws against Loyola (Chicago) and Eastern Illinois.  Corey Arno leads the Green Bay offense with three goals and seven points on the year.  In goal, Maddie Drusch ranks second in the conference with a 1.21 goals against average.

Scouting Loyola: The Ramblers enter the weekend having played Green Bay to a scoreless double overtime draw on Tuesday night.  Loyola heads to Milwaukee on Friday before hosting the Crusaders on Sunday night.  Ani Michl leads the Ramblers offensively, having scored two of their three goals on the year.  In goal, Katie Groesch has played every minute, notching a 1.56 goals against average.

Henderson Breaks Through: Brooke Henderson finally put her name in the scoring column in her 27th career match with a header off of a corner kick last Friday against Liberty.  The midfielder’s goal also helped her tally her first two collegiate points.

A Freshman at the Top: Rookie Rachel Hoaglin drew the assist on Henderson’s goal, giving her five points on the season to tie Jackie Kondratko for the team lead in that category.  Hoaglin has two goals and an assist while Kondratko has a goal and three helpers.

Truly a Mainstay: Mele Cabral continues her string of matches between the posts.  The senior goalkeeper has played every minute of every contest the last two seasons, all 28, for a total of 2600:14 consecutive minutes for the Brown and Gold.

Cabral All-Time Goals Against Average Leader: Mele Cabral qualified for Valpo’s all-time goals against average list earlier this season when she surpassed 2,500 career minutes in goal.  The senior’s 0.83 career mark moved her in front of Erin Murray (2004-2007) for the top spot.  Murray previously held the record with a 1.19 career goals against mark.

Lots of Shots: Jackie Kondratko and Sarah Jewell both rank among the top-10 in school history in shot attempts.  Kondratko has 89 shots in her four years with Valpo, ranking eighth all-time, just three behind Erin Crowgey (1997-2000) for seventh place on the career chart.  Jewell is now ninth, one shot behind Kondratko, with 88.

Starting the Second Half: Valpo enters the weekend at the midway point of the season, having played nine of their 18 regular season matches this season.