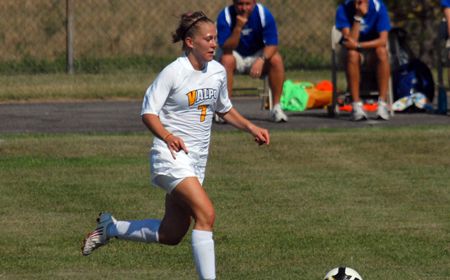 Tracy Roos and the Crusaders are second in the league in goals allowed. (Ray Acevedo)
Related Links

This Week in Crusader Soccer: Valparaiso begins a three-match homestand on Sunday afternoon as the Crusaders host Milwaukee at Eastgate Field.  The Crusaders have won two straight at home contests heading into the match, while the Panthers were the preseason favorite to win the Horizon League.

Head Coach John Marovich: John Marovich is 14-13-3 in his second season overall and with Valpo.  Just the third coach in program history, he has moved into second place all-time in victories for the Crusaders.

Series Notes: Valparaiso and Milwaukee are meeting for the 10th time with the Panthers having won each of the previous nine meetings.  Last year the Panthers notched a 3-1 victory over the Crusaders in the regular season finale in Milwaukee, Wis.

Wrapping Up Last Week’s Action: Rachel Hoaglin scored on a cross from Janine Lytle in the 67th minute and Luisa Desario added an insurance goal with just over three minutes remaining as Valparaiso shutout Green Bay 2-0 at Eastgate Field on Friday afternoon.  Mele Cabral made a pair of stops for her 15th career shutout as the Crusaders earned their first Horizon League victory of the season.  On Sunday in Chicago, Loyola tallied the lone goal with just over 20 minutes remaining as the Ramblers posted a 1-0 win over Valpo.  Cabral made four stops in the loss.

Scouting Milwaukee: The Panthers enter the week having just snapped a six-match winless streak on Friday with a 5-1 win over Loyola (Chicago) to open Horizon League play.  Milwaukee plays at Butler on Friday before heading to Valpo.  The Panthers have already played three top-25 programs this season and seven matches against teams in the Big Ten.  Sarah Hagen leads the offense with 16 points on six goals and four assists.  Sarah Talbert has added three scores while Kate Megna has four assists to share the team lead.  Jamie Forbes has played the majority of the minutes in goal, posting a 1.52 goals against averaged and four shutouts.

Location Change on October 11: Valpo’s match against Detroit on October 11 will now be played at Eastgate Field beginning at 3 p.m.

Truly a Winner: Rachel Hoaglin may only be a freshman, but she’s already provided two match-winning goals for the Crusaders this season.  She tallied the winner Friday against Green Bay as well as back on September 3 when she scored the winner late in the match against Ball State.  Hoaglin is tied for the team lead with three goals and holds the team lead with seven points this year.

Another Freshman at the Top: Luisa Desario is tied with Rachel Hoaglin for the team’s scoring lead with three goals this season.  She tallied her third of the season as an insurance tally on Friday against Green Bay.  Between Desario, Hoaglin, and Trisha Wladeck (one goal), freshmen have accounted for 78% of the team’s scoring this year.

Tough to Score on Valpo: Valpo ranks second in the Horizon League this year with a 1.17 goals against average as a team.  The Crusaders have surrendered just 13 goals in 11 matches, trailing just Wright State who has allowed 14 goals this year.  Valpo has pitched three shutouts this season defensively as well.

Cabral Among Top-Five All-Time Goalies: Mele Cabral has moved into fourth place on Valpo’s all-time list for matches played with 37 in her career.  She is just 30 minutes shy of moving into third place on the minutes played list as well having played 3227:35 in her four years.

Truly a Mainstay: Mele Cabral continues her string of matches between the posts.  The senior goalkeeper has played every minute of every contest the last two seasons, all 30, for a total of 2780:14 consecutive minutes for the Brown and Gold.

Cabral All-Time Goals Against Average Leader: Mele Cabral qualified for Valpo’s all-time goals against average list earlier this season when she surpassed 2,500 career minutes in goal.  The senior’s 0.81 career mark moved her in front of Erin Murray (2004-2007) for the top spot.  Murray previously held the record with a 1.19 career goals against mark.

Lots of Shots: Jackie Kondratko and Sarah Jewell both rank among the top-10 in school history in shot attempts.  Kondratko just moved past Erin Crowgey (1997-2000) into seventh place with 95 shots in her four years with Valpo.  Jewell is now ninth, four shots behind Crowgey, with 88.  Jessie White is also on the verge of moving into the top-10 on the career list.  She has 76 career shots, eight away from matching Kerry Donoho (1994-1997) on the charts.