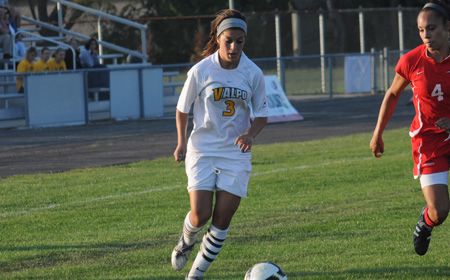 “Milwaukee is a good team and we didn’t handle Hagen well today,” Valpo head coach John Marovich said after the match.  “We allowed her time and space and she had two very good finishes.”

Milwaukee jumped on top quickly as Hagen scored her first goal of the match 12:28 into the contest, taking a cross from Kate Megna in the middle of the box and scoring from inside of five yards.  She added her second goal just over 10 minutes later on a header in the box, and tallied her third just over a minute-and-a-half later.

Helen Steinhauser made it 4-0 Panthers before intermission with a blast from 25 yards out and Hagen added her fourth goal of the day on a penalty kick four minutes into the second half.

Desario put the Crusaders on the board with 33:30 remaining in the match, taking a pass from Rachel Hoaglin (Lakeville, Minn./Academy of Holy Angels H.S.) and beating goalkeeper Leslie Deebach from 15 yards out, far side.

For Desario, the goal was her team-leading fourth of the season, ranking her in a tie for fourth place in the Horizon League.

“The second half I thought we played less frantic,” Marovich added.  “I was glad we continued to battle and got a goal out of it.”

Milwaukee outshot the Crusaders 21-5 for the match, including 13-1 in the first 45 minutes.  Mele Cabral (Boulder, Colo./Fairview H.S.) made three saves in goal for the Brown and Gold while Rachel DeFrank (Mason, Ohio/Mason H.S.), making her collegiate debut, made a pair of stops in relief.  Deebach made one save for the Panthers.

Valparaiso will continue its three-match homestand on Friday afternoon, stepping out of Horizon League action to host Indiana State to begin Homecoming weekend.  Kickoff is set for 4 p.m. with all the action carried live on WVUR (95.1-FM, Valparaiso) and online at www.valpoathletics.com.

Match Notes: Desario and Hoaglin are each tied for the team lead with eight points each … Hoaglin’s assist was her second of the season … Cabral had her streak of 2855:29 straight minutes of action in goal dating back to the start of 2008 end … eight of Valpo’s 10 goals this season are by freshmen … Cabral moved into third place on Valpo’s career minutes played list (3302:49) as well as fourth place for matches played in goal (38) … Milwaukee leads the all-time series 10-0 … the start of the match was delayed 2:06 due to scheduling with the officials.