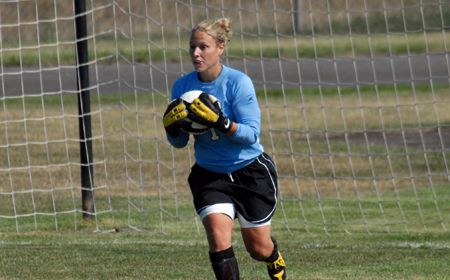 This Week in Crusader Soccer: It’s Homecoming weekend at Valparaiso and the women’s soccer team wraps up its three-match homestand with a pair of contests at Eastgate Field.  Friday the Brown and Gold will step out of conference action to host instate foe Indiana State before returning to Horizon League action on Sunday to battle Detroit.

Head Coach John Marovich: John Marovich is 14-14-3 in his second season overall and with Valpo.  Just the third coach in program history, he has moved into second place all-time in victories for the Crusaders.

Upcoming Promotions: Sunday, Duffy’s Place has donated wings that will be available at the match for fans.  In addition, soccer alums will be invited to take place in halftime contests.

Location Change Versus Detroit: Valpo’s match against Detroit on Sunday, October 11 will now be played at Eastgate Field beginning at 3 p.m.

Series Notes: Valparaiso and Indiana State are meeting for the 10th time dating back to 2000.  The Crusaders lead the overall series 7-2, and have won five straight matches against the Sycamores, including a 2-1 triumph in Terre Haute, Ind. last season.  Valpo is 4-0 against Indiana State all-time at Eastgate Field.  The Crusaders and Detroit are meeting for just the sixth time in a series that dates back to Valpo’s inaugural season of women’s soccer, 1993.  The Titans hold a 4-1 edge in the series after a 2-1 win in the Motor City one year ago.  The lone Crusader win came in 2007 at Eastgate Field where Valpo is 1-2 against Detroit.

Wrapping Up Last Week’s Action: Luisa Desario scored Valparaiso’s lone goal of the match in the 57th minute with Rachel Hoaglin drawing the assist on Sunday afternoon as the Crusaders fell 5-1 to Milwaukee at Eastgate Field.  Sarah Hagen scored four times for the Panthers, including three goals in the first half.  Milwaukee outshot Valpo 21-5 on the afternoon, including 10-2 on goal.

Scouting Indiana State: The Sycamores enter Friday’s match looking to stop a two-match losing skid following a 4-2 loss to Illinois State at home on Saturday.  Katlin Owens and Seyma Erenli lead Indiana State’s offense with three goals each, with Owens also registering three assists.  In goal, Emily Lahay has played a majority of the minutes for the Sycamores, posting a 1.74 goals against average and a .754 save percentage.

Scouting Detroit: The Titans head to Butler on Friday before visiting Valpo Sunday afternoon.  Detroit is coming off of a 3-1 win at home against Youngstown State on Sunday afternoon for its first Horizon League win of the year.  Nina Carter leads the Titan offense with three goals this season while Joanna Hinde sports a 1.51 goals against average and an .812 save percentage in goal this season.

A Freshman at the Top: Luisa Desario leads the team in scoring after notching her fourth goal of the season against Milwaukee.  She ranks fourth in the Horizon League in goals this year, leading the freshmen charge for the Brown and Gold.  She is also tied with Rachel Hoaglin for the team lead with eight points.  Rookies have scored eight of Valpo’s 10 goals.

Cabral Among Top-Five All-Time Goalies: Mele Cabral has moved into fourth place on Valpo’s all-time list for matches played with 38 in her career.  She is also ranks third on the minutes played list having played 3302:49 in her four years.

Streak Ends: Mele Cabral’s consecutive minute streak in goal ended on Sunday at 2855:29 dating back to opening day of 2008.  Rachel DeFrank relieved Cabral for the final 14:46 against Milwaukee, making her collegiate debut between the posts.

Cabral All-Time Goals Against Average Leader: Mele Cabral qualified for Valpo’s all-time goals against average list earlier this season when she surpassed 2,500 career minutes in goal.  The senior’s 0.93 career mark moves her in front of Erin Murray (2004-2007) for the top spot.  Murray previously held the record with a 1.19 career goals against mark.

Lots of Shots: Jackie Kondratko and Sarah Jewell both rank among the top-10 in school history in shot attempts.  Kondratko just moved past Erin Crowgey (1997-2000) into seventh place with 96 shots in her four years with Valpo.  Jewell is now ninth, four shots behind Crowgey, with 88.  Jessie White is also on the verge of moving into the top-10 on the career list.  She has 77 career shots, seven away from matching Kerry Donoho (1994-1997) on the charts.

Making the Most of Shots: Since Horizon League play began, Valpo has put 17 of its 36 shot attempts (47.2%) on goal, forcing opposing keepers to make a save or risk surrendering a goal to the Crusaders.