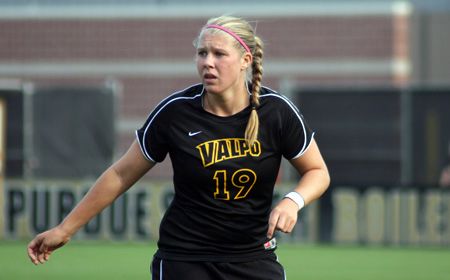 “This obviously isn’t the result we wanted, but we put three goals on the board so that is a positive,” head coach John Marovich said afterwards.  “We were not as sharp defensively today as we have been.”

With wind chills in the low 40s, it was the Sycamores that struck first on the wet field.  Katlin Owens sent a cross from the right side of the penalty area into the box and Erin Bianchi scored the first of her two goals on the day at the 18:06 mark.

Valpo tied the match at one with just over 15 minutes remaining before halftime.  Jackie Kondratko (Granger, Ind./Penn H.S.) sent a cross from the left side that Catherine Terrrell (Brighton, Mich./Brighton H.S.) redirected in the box past goalkeeper Emily Lahay for her first collegiate goal.

Just before intermission, Becky Clever (Cincinnati, Ohio/Madeira H.S.) put the Brown and Gold on top with her first goal of the season.  Mikki Nuccio (Ortonville, Mich./Brandon H.S.) sent a shot in on Lahay that slipped past her and Clever finished to make it 2-1 Crusaders heading into the locker room.

Indiana State (3-8-2) tied the match at two just 4:21 into the second half.  Bianchi scored her second goal of the match on a deflection of a Casey Allbright ball.

Kondratko put Valpo on top with just 13:02 to play in regulation, as she settled a clearing attempt from backup netminder Taylor Nelson, and sent a blast into the back of the net from 18 yards out.

Less than four minutes later, the Sycamores tied the match at three as Alison Gasparovich scored off of a deflection in the box and the two schools would battle for another 30 minutes through overtime before finishing in a deadlock.

Valpo controlled the offensive run of play most of the match, outshooting Indiana State 27-11, including a 19-5 advantage after halftime.  The Crusaders also had 16 corner kick opportunities, including eight in the second half and five more in overtime, but could not score off of the set pieces.

Valparaiso (4-8-2) will wrap up its three-match homestand on Sunday afternoon, returning to Horizon League play to host Detroit.  Kickoff is set for 3 p.m. at Eastgate Field with all the action carried live on WVUR (95.1-FM, Valparaiso).

Match Notes: Valparaiso leads the all-time series 7-2-1 and is 5-0-1 over the last six matches … the Crusaders are 4-0-1 all-time against the Sycamores at Eastgate Field … this is Valpo’s first result of the season when its opponents scored first … with three points on Friday, Kondratko is now tied for the team lead with eight … Kondratko’s four assists on the season are tied for eighth on the single season list … Kondratko is now tied for ninth on the all-time points list with 23 for her career … Cabral now ranks sixth on the career list with 145 all-time saves … Terrell’s goal was also her first collegiate point.