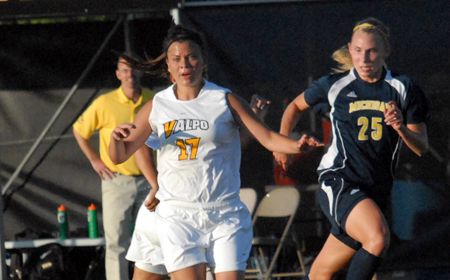 Luisa Desario (Bartlett, Ill./Bartlett H.S.) scored her team-leading fifth goal of the season just 2:30 into overtime on Sunday afternoon as Valparaiso defeated Detroit 3-2 at Eastgate Field in a key Horizon League match for both teams.

Desario took a pass from Tracy Roos (Centennial, Colo./Cherry Creek H.S.) and rifled a shot  from 20 yards out past the Titans’ backup goalkeeper Madeline Franko for her first collegiate match-winner as Valparaiso improved to 2-3 in conference play (six points), moving into sixth place in the league standings.  The top six teams qualify for the Horizon League Tournament beginning November 1.

“To get a win like this after playing overtime on Friday shows the fitness of our kids,” head coach John Marovich said after the match.   “Our attack has been flying around recently and the six goals this weekend are a product of that.”

Valpo jumped on top just under 13 minutes into the match as Sarah Melhorn (White Bear Lake, Minn./White Bear Lake H.S.) sent a feed ahead to Jackie Kondratko (Granger, Ind./Penn H.S.), who scored from 15 yards out on the right side, making it 1-0 Brown and Gold.  For Kondratko, it was her third goal of the season and she is tied with Desario with a team-leading 10 points overall.

Detroit (3-10-1, 1-3 Horizon) answered just over 10 minutes later as Trina Kochnaski scored on a rebound off of a Alyssa Korson shot that was set up by a corner kick and the two teams went into intermission deadlocked at one.

Ten minutes into the second stanza Jessie White (Buffalo Grove, Ill./Buffalo Grove H.S.) made it 2-1 Crusaders with her first goal of the season, following her own shot, which was blocked initially, and putting the rebound past starting goalkeeper Joanna Hinde.

The Titans tied the match with 8:12 to play though, playing a player down following a red card to Hindein the 77th  Trina Kochanski settled the ball in the top of the box and scored just over the outreached arms of Valpo goalkeeper Mele Cabral (Boulder, Colo./Fairview H.S.), setting the stage for overtime. minute.

Valparaiso outshot Detroit 24-10 in the match, including 15-2 after halftime, and held a 5-1 advantage on corner kick opportunities.  Hinde made six stops in goal for the Titans while Franko made another.  Cabral had two saves for the Crusaders.

Valparaiso (5-8-1, 2-3) will take to the road for a pair of matches next weekend, beginning with a 3 p.m. CDT contest against Youngstown State on Friday in Youngstown, Ohio.

Match Notes: Detroit leads the all-time series 4-2 but Valpo has won two of the three meetings since joining the Horizon League … Roos and Melhorn, both defenders, each had their first collegiate assists … Kondratko now has 25 career points, ninth most all-time at Valpo … White has 23 career points, moving into a tie with Beth Muskovich (1996-1999), Allison Swanson (2002-2005), and Jackie Thomas (2005-200) for 10th on the career points list … Swanson and Thomas were both present for the match on Homecoming weekend … Valpo is now 5-2 when scoring first … the Crusaders scored six goals in two matches this weekend after tallying 10 total the first 12 contests.