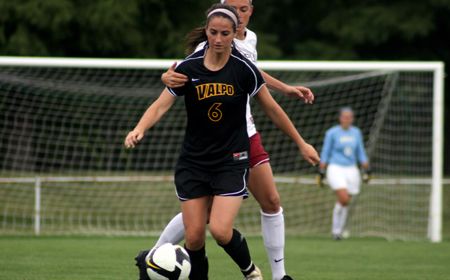 Rachel Hoaglin (Lakeville, Minn./Academy of Holy Angels H.S.) had a goal and an assist as Valparaiso posted its fourth shutout of the season with a 2-0 victory over Youngstown State at Stambaugh Stadium in Youngstown, Ohio on Friday afternoon.

“We did a nice job of possessing the ball today,” head coach John Marovich said afterwards.  “We were very patient offensively.”

Hoaglin got the offense moving in the first half, sending a service into the box at the far post which Jackie Kondratko (Granger, Ind./Penn H.S.) received and beat goalkeeper Mariah Snyder from inside the six-yard box for her fourth goal of the season.

“It was great to get that first goal 20 minutes into the match,” Marovich added.  “It allowed us to settle in and play our game.”

The Crusaders took the 1-0 lead into intermission as the defense allowed the Penguins just one shot attempt in the first 45 minutes.

Valpo added its insurance goal with just under 25 minutes to play.  Sarah Melhorn (White Bear Lake, Minn./White Bear Lake H.S.) took a free kick from 35 yards out and found the head of Hoaglin at the top of the six and she put the ball past Snyder for her fourth goal of the year as well.

“After the second goal we were able to fight off the rest of the match on the road and get a well-earned three points,” Marovich concluded.

Valpo outshot Youngstown State (3-9-2, 0-5 Horizon) 9-3 for the match, holding a 5-2 edge on goal.  The Crusaders also had the only three corner kick opportunities of the contest.  Mele Cabral (Boulder, Colo./Fairview H.S.) made one save for the Brown and Gold on her way to her fourth shutout of the season while Snyder made three stops for the Penguins.

Valparaiso (6-8-1, 3-3) will close out the road portion of the regular season on Sunday afternoon in Cleveland, Ohio against the Vikings of Cleveland State.  Kickoff is set for 11 a.m. CDT.

Match Notes: Valpo leads the all-time series with Youngstown State 8-0-1 and is 4-0 all-time facing the Penguins in Ohio … Cabral now has 16 career shutouts, second most all-time … her four shutouts this year are tied for sixth on the single season charts … Melhorn has assists in each of the last two matches after not having any in her first 49 contests of her career … Hoaglin and Kondratko now share the team lead with 12 points each … Hoaglin now joins Kondratko and six others in a tie for eighth on the single season assist list with four this year … Kondratko’s match-winning goal is the fourth of her career, tying her with Allison Swanson (2002-2005) for eighth on the all-time list.