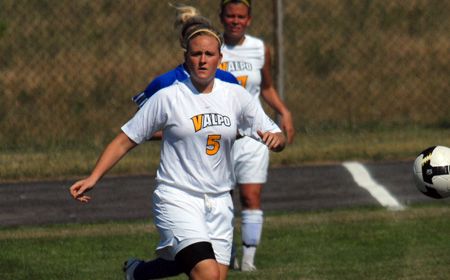 Courtney Gwinn is one of five seniors being recognized this weekend. (Ray Acevedo)
Related Links

This Week in Crusader Soccer: Valparaiso wraps up the 2009 regular season this weekend with a pair of home matches at Eastgate Field.  On Friday the Crusaders close Horizon League play with a key match against Butler that will go a long way towards determining seeding in the upcoming Horizon League Tournament.  Sunday afternoon will be Senior Day at Eastgate Field when the Mastodons of IPFW visit.

Upcoming Promotions: Both matches this weekend are designated as “Think Pink” contests in which Valpo Athletics is raising money for Susan G. Koman for the Cure.  Sunday is also Senior Day in which the Crusaders’ four seniors will be honored prior to the match.

Head Coach John Marovich: John Marovich is 17-14-4 in his second season overall and with Valpo.  Just the third coach in program history, he has moved into second place all-time in victories for the Crusaders.

Series Notes: Valparaiso and Butler are meeting for the seventh time in a series that dates back to 1997 with the Crusaders looking for their first win ever against the Bulldogs.  Butler leads the series 6-0 following a 2-0 win in Indianapolis last year to open up the Horizon League campaign.  The Crusaders and IPFW are meeting for the ninth time in a series dating back to 2001 with Valpo holding a 5-2-1 all-time advantage.  Valpo has won two straight meetings following a 1-0 shutout win in Fort Wayne, Ind. one year ago.  The Crusaders are 3-1 against the Mastodons at Eastgate Field.

Wrapping Up Last Week’s Action: Jackie Kondratko scored midway through the first half and Rachel Hoaglin added an insurance goal halfway through the second as the Crusaders defeated Youngstown State 2-0 in Youngstown, Ohio on Friday.  Hoaglin also had an assist for a three-point day.  Sunday in Cleveland, Ohio, Luisa Desario and Hoaglin scored 32 seconds apart as Valpo defeated Cleveland State 2-0.  Mele Cabral needed to make just three total saves on the weekend on the way to earning a pair of shutouts in goal.

Scouting Butler: The Bulldogs enter the match following a 1-1 double overtime draw Sunday at Youngstown State.  Butler comes into the final weekend in fourth place in the Horizon League standings with 10 points, just two behind the Crusaders.  Molly Kruger and Katie Griswold lead the offensive attack with five goals each.  Kruger leads Butler in assists and points as well with six and 16 respectively.  In goal, Jessica Schein has played the majority of the minutes and sports a 1.28 goals against average and a .712 save percentage.

Scouting IPFW: The Mastodons enter the weekend having dropped two straight following a 2-1 loss to Centenary on Sunday.  IPFW travels to Oakland on Friday before visiting Valpo this Sunday.  Lisa Underwood leads IPFW in scoring with 10 goals and 21 points on the year while Kristen McFadden has played every minute in goal.  She has recorded a 1.84 GAA and a .762 save percentage this season.

Thanks Seniors: Valparaiso’s five seniors, Mele Cabral, Courtney Gwinn, Sarah Jewell, Jackie Kondratko, and Jessie White will be honored prior to Sunday’s match with IPFW.  Cabral is second all-time in goal with 17 career shutouts while the four field players have scored 31 combined goals and 19 assists for 81 total points.

The Conference Race: With a win against Butler on Friday, Valpo would be assured of its first top-three finish since joining the Horizon League.  The Crusaders would host a first round Horizon League Tournament match unless they would finish second, thus earning a bye into the semifinals.  A loss or a tie against the Bulldogs opens the possibility to finish fourth or fifth.  The fourth place finisher also hosts a first round match.

Looking to Finish .500: With two wins this weekend the Crusaders would be guaranteed of finishing at least .500 for the sixth consecutive season.

Freshmen Scoring Duo: Rookies Rachel Hoaglin and Luisa Desario have paced the Valpo offensive attack this season.  Hoaglin has a team-leading 14 points with five goals while sharing the team lead with four assists.  Desario is tied for third in the Horizon League with six goals this year and has 13 total points.  Each of the freshmen has two match-winning goals this year as well.

All-Time Scoring Leaders: Sarah Jewell, Jackie Kondratko, and Jessie White are all in the top-10 on Valpo’s career points list.  Jewell ranks eighth with 31 while Kondratko just moved into ninth place with 27.  White is tied for 10th with 23 points.

Cabral All-Time Goals Against Average Leader: Mele Cabral qualified for Valpo’s all-time goals against average list earlier this season when she surpassed 2,500 career minutes in goal.  The senior’s 0.95 career mark moves her in front of Erin Murray (2004-2007) for the top spot.  Murray previously held the record with a 1.19 career goals against mark.

Lots of Games: With two appearances this weekend, Jessie White will move into the top-10 all-time in games played.  She enters play Friday with 73 career appearances in a Brown and Gold uniform.