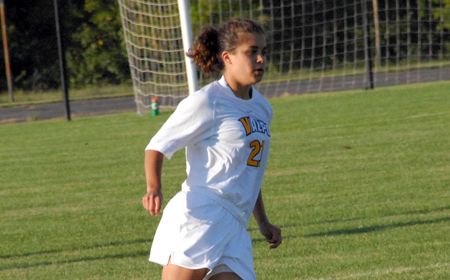 Valparaiso earned a home match for the Horizon League Tournament on Friday afternoon as the Crusaders defeated instate rival Butler for the first time in school history with a 2-0 shutout against the Bulldogs at Eastgate Field.

Jackie Kondratko (Granger, Ind./Penn H.S.) and Rachel Hoaglin (Lakeville, Minn./Academy of Holy Angels H.S.) provided the offense and Mele Cabral (Boulder, Colo./Fairview H.S.) registered her third straight shutout as the Crusaders assured themselves of a third place finish in the Horizon League, their highest finish since joining the conference.

Playing on a wet field with winds over 20 miles per hour, the two schools battled to a scoreless draw over the first 45 minutes of play.  Butler had a 6-4 shot advantage, utilizing the win at its back, but Cabral made three saves to keep the Bulldogs off of the scoreboard.

“I thought we managed the game well in the first half with the conditions what they were and the wind in our face,” head coach John Marovich said.  “We did a good job in the air.”

Kondratko put the Crusaders on the scoreboard 9:17 out of the locker room.  Cabral started the play with clearing the ball with a throw-out and Kondratko ended up finishing with a header in the box off of a cross from the left side by Luisa Desario (Bartlett, Ill./Bartlett H.S.).

“In the second half we were able to press the game with the wind and Jackie’s goal was just world class,” Marovich added.

Hoaglin then added an insurance goal with 17:09 remaining, poking the ball away from Butler goalkeeper Jessica Schein and pushing it just past the goal line.

“Jessie White (Buffalo Grove, Ill./Buffalo Grove H.S.) did an outstanding job of putting pressure on in the second half,” Marovich concluded.  “It helped set the tone and led to that second goal.”

Cabral finished the match with four saves for her sixth shutout of the year, ranking her in a tie for second on the single season charts at Valpo.

Valparaiso (8-8-1, 5-3), which has reached .500 for the first time this season, will close out the regular season at Eastgate Field on Sunday afternoon hosting IPFW on Senior Day.  Kickoff is set for 1 p.m. with all the action heard live on WVUR (95.1-FM, Valparaiso) and online at www.valpoathletics.com.

Match Notes: Butler had won the first six matches all-time in the series prior to Friday … Kondratko’s match-winning goal was the fifth of her career, ranking her in a tie for seventh all-time … the goal was the 11th of her career, moving her into a tie for eighth with Lindsay Holley (2001-2004) and Jackie Thomas (2004-2007) on the all-time list … Hoaglin’s goal gives her six on the year, tied for ninth on the single season list … her 16 points rank her eighth for a single season … Valpo has scored 22 goals this season, tied for fifth most in school history for a single season.