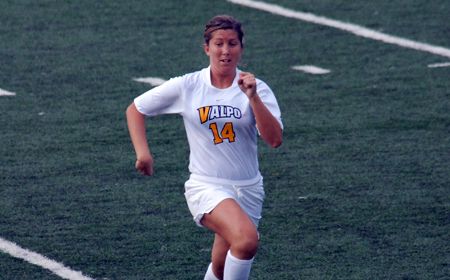 Valparaiso closed the 2009 regular season on Sunday afternoon with a 2-0 victory over IPFW for the Crusaders’ fourth consecutive shutout as the Brown and Gold celebrated Senior Day at Brown Field.

“I thought we moved the ball well today and managed the game,” head coach John Marovich said after the match.  “We made the game simple and played all 90 minutes.  It was great to see our focus sharp coming off of the big conference win on Friday (against Butler).”

This was the fourth straight 2-0 shutout win for the Crusaders and senior goalkeeper Mele Cabral (Boulder, Colo./Fairview H.S.), who needed to make just one save in the match.  Cabral now has seven shutouts on the season and 19 for her career, with both numbers ranking second on the single season and career charts respectively.

Another senior got the scoring started for Valpo just 3:27 into the contest.  Sarah Jewell (Kansas City, Mo./Park Hill H.S.) knocked in a rebound off of a Rachel Hoaglin (Lakeville, Minn./Academy of Holy Angels H.S.) shot to make it 1-0 Brown and Gold.  For Jewell, it was her first goal of the season and 14th of her career, sixth most in school history.

Hoaglin added her team-leading seventh goal of the year, tied for seventh most in a single season ever at Valpo, at the 59:10 mark.  She took a cross from the left side by senior Jessie White (Buffalo Grove, Ill./Buffalo Grove H.S.) and beat goalkeeper Brittany Marx for the insurance tally.  For White, it was her eighth career assist, tied for ninth all-time in a Crusader uniform.

Valparaiso outshot the Mastodons 13-4 for the match, controlling things on the offensive end.  The Crusaders won nine corner kick opportunities while IPFW (4-10-1) had just one for the match.  Marx made five saves between the posts for the visitors.

In addition to Cabral, Jewell, and White, seniors Jackie Kondratko (Granger, Ind./Penn H.S.) and Courtney Gwinn (Evansville, Ind./Harrison H.S.) were honored prior to the match

Valparaiso (9-8-1) is assured of at least a .500 season for the sixth consecutive season and will open play in the Horizon League Championships next Sunday afternoon at Eastgate Field as the tournament’s third seed.  The Crusaders’ opponent and match time have yet to be determined and will be announced early this week.

Match Notes: Valpo leads the all-time series with IPFW 6-2-1 and has now won three straight meetings … Jewell moved into seventh place on the career points list with 33 while White moved into 10th place with 24 … Hoaglin’s 19 points this season lead the team and rank sixth on the single season list … Valpo’s 24 goals this year are fifth most in school history and 21 assists rank fourth most for a single season … Cabral has not allowed a goal in the last 370:42.