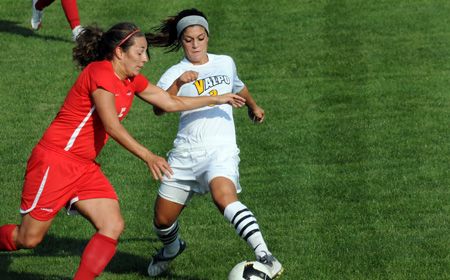 Desario scored six goals and added two assists during her rookie campaign with the Crusaders, leading Valpo to a 9-8-1 regular season and a third place finish in the Horizon League with a 5-3 mark.  She finished second on the team in both goals and points, and also tallied a pair of match-winning goals, both of which came against conference foes.

Hoaglin led the Crusaders in scoring this season with seven goals and 19 points, ranking third in the conference in both categories.  She also had a team-leading five assists on the season and added a pair of match-winners as well.

Desario is just the second Valpo women’s soccer player ever to be named to the Horizon League’s First Team while Hoaglin is the fourth to earn Second Team honors.  They are the third and fourth members of the All-Newcomer Team as well.

Valpo will open Horizon League Tournament play on Sunday afternoon at Eastgate Field as the Crusaders host sixth-seeded Green Bay.  Kickoff is set for 1 p.m. with all of the action carried live on WVUR (95.1-FM, Valparaiso) and online at www.valpoathletics.com.