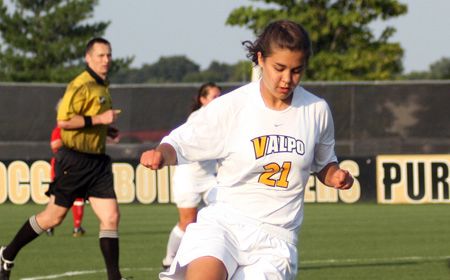 The victory, Valpo’s sixth straight, was the fifth in a row by a 2-0 margin.

“We’re excited to get the win today,” head coach John Marovich said after the match.  “We’ve traveled a great journey of ups and downs this season.

Kondratko wasted little time putting Valpo on the scoreboard, finding the back of the net with a blast from 15 yards out on the right side.  Luisa Desario (Bartlett, Ill./Bartlett H.S.) drew the assist on the goal, which Kondratko sent high above Maddie Drusch just 9:57 into the contest.

The senior added her seventh goal of the season with 12:37 remaining to give the Crusaders insurance scoring to the far post from the right side.  Her two tallies give her 13 for her career and 33 career points, seventh most in school history in each category.  Her six match-winning goals now rank sixth all-time for the Brown and Gold as well.

“Jackie is an outstanding individual and a tremendous leader,” Marovich said.  “In big games seniors and leaders step up and that’s what she did today.”

Valpo outshot the Phoenix 20-7 for the match, including 12-3 over the final 45 minutes.  Drusch was forced to make six saves for Green Bay (4-11-3) while Mele Cabral (Boulder, Colo./Fairview H.S.) registered her fifth straight shutout without making a save.  Cabral has tied Erin Murray’s (2004-2007) school record for 20 career clean sheets.

“We had a great effort by all three thirds of the field,” Marovich concluded.  “Everyone made a difference today.”

With the victory, Valparaiso (10-8-1) will advance to Friday’s semifinals to battle second-seeded Wright StateMilwaukee, Wis.  Kickoff is slated for 5 p.m. with the action carried live on WVUR (95.1-FM, Valparaiso) and online at www.valpoathletics.com. (11-6-2) in

Match Notes: Green Bay leads the all-time series 8-3-1 but Valpo is 3-0-1 in the last four meetings, sweeping this year’s two contests … top seeded Milwaukee will face fourth-seeded Loyola in the second semifinal on Friday … Cabral’s shutout was her eighth of the season … Kondratko’s seven goals are tied for seventh on the single season charts while her 18 points rank her in seventh as well … this is Valpo’s sixth straight 10-win season … Valpo is 3-1 in matches at Brown Field … Jessie White (Buffalo Grove, Ill./Buffalo Grove H.S.) played in her 76th career match, moving into a tie for seventh all-time at Valpo.