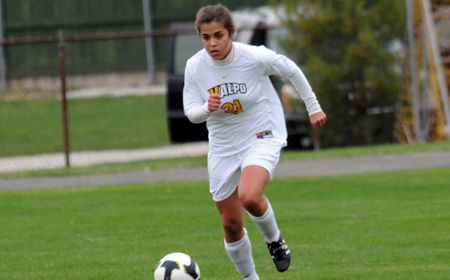 Jackie Kondratko is October's Scholar-Athlete of the Month. (Ray ACevedo)

Kondratko tallied nine points on four goals and an assist in seven matches for the Crusaders during the month of October, helping the Brown and Gold secure third place in the Horizon League standings, Valpo’s highest finish ever in the league.

The senior had a three-point match with a goal and an assist against Indiana State during the month.  Kondratko tallied a pair of match-winning goals for the Crusaders in October while putting 15 of her 19 shot attempts on goal.

In the classroom, Kondratko sports a 3.95 cumulative grade point average as a mechanical engineering major.  She is a two-time ESPN The Magazine First Team Academic All-District V selection and was selected to the Horizon League’s All-Academic Team a year ago.  She also has been named to the conference’s Fall and Spring Academic Honor Rolls.

Kondratko and the Crusaders will take on Wright State Friday evening in the semifinals of the Horizon League Championship.  Kickoff is set for 5 p.m.