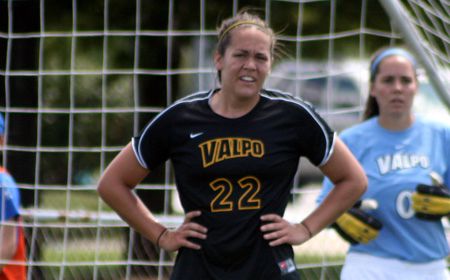 Brooke Henderson had a goal and an assist in the win. (Casey Pedersen)
Valparaiso at Wright State | November 06, 2009
Related Links
Related Links

Valparaiso won its seventh consecutive match on Friday evening, advancing to Sunday’s Horizon League championship match with a 2-1 victory over second-seeded Wright State in the semifinals in Engelmann Field in Milwaukee, Wis.

For the third-seeded Crusaders, it will mark their first appearance ever in the Horizon League championship after joining the league prior to the 2007 season.  Valpo will take regular season champion Milwaukee, a 2-0 victory over Loyola (Chicago) in the second semifinal, at 1 p.m. on Sunday with an NCAA Tournament bid at stake.

“In tournament play you look to stay alive,” head coach John Marovich said.  “We’re still alive and will be ready to play on Sunday.”

The Brown and Gold jumped on top 28:50 into the match as Brooke Henderson (Westlake, Ohio/Westlake H.S.) scored on a header off of a corner kick from Trisha Wladecki (Avon Lake, Ohio/Avon Lake H.S.), one of two corner kicks the Crusaders earned on the evening.  Scoring first would prove key for Valpo, as the Crusaders have now scored first in all 11 of their victories this season.

Valpo took the 1-0 lead into intermission as both teams managed seven shot attempts in the opening 45 minutes.

The Crusaders wasted little time in the second half adding what would prove to be the valuable insurance tally just 2:55 out of the locker room.  Henderson found Jessie White (Buffalo Grove, Ill./Buffalo Grove H.S.) in the corner of the box and White sent it far post for her second goal of the season.  For Henderson who drew the assist, it marked a three-point match after the sophomore had registered two total in her career prior to the match.

“I thought Jessie had a very nice match today and Brooke was very good in the midfield,” added Marovich.  “Every third of the field did a solid job managing the game.  Scoring that early goal in the second half turned out to be a big deal”

Wright State (11-7-2) cut the Crusaders’ lead in half with 26:44 remaining.  Jen Agueci sent a high ball into the box that Nicole Amador and found the back of the net.

Mele Cabral (Boulder, Colo./Fairview H.S.) stayed strong the rest of the way though, making four saves on the night to keep the Brown and Gold unbeaten in its last eight matches overall and defeat the Raiders for the first time in program history.

Valpo (11-8-1) outshot the Raiders 15-2 for the match and had the only corner opportunities of the day.  Wright State goalkeeper Meghan Hackerson made four saves in the loss.

Valparaiso will look for its second conference championship in program history on Sunday, and first since 2005 when the Brown and Gold won the Mid-Continent Conference to earn its only NCAA Tournament appearance in program history.

Match Notes: Valpo last appeared in a conference title match in 2005 when Valpo defeated Oakland 3-1 for the Mid-Con crown … the Crusaders avenged an earlier 3-0 loss to Wright State during the regular season and improved to 1-7 all-time against the Raiders … White’s goal was the ninth of her career and gives her 26 career points, 10th most in school history … Wladecki’s assist was her second of the year … Valpo is now 6-10-2 all-time in neutral site matches but has won two straight … White played in her 77th career match, tied for fifth all-time at Valpo … the match-winning goal was White’s fourth of her career, tied for ninth on the all-time list with Allison Swanson (2002-2005) … Valpo’s 11 wins are the third most in program history … the seven-match win streak is second longest in school history, one shy of the school record … Sunday’s championship will be carried live on WVUR (95.1-FM, Valparaiso) and on the Horizon League Network.