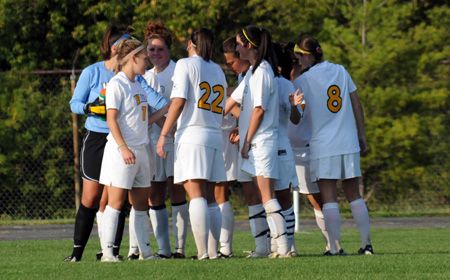 This Week in Crusader Soccer: Valparaiso takes on Horizon League regular season champion Milwaukee on Sunday afternoon in the championship match of the 2009 Horizon League Tournament with a trip to the NCAA Tournament at stake for the winner.

Head Coach John Marovich: John Marovich is 21-14-4 in his second season overall and with Valpo.  Just the third coach in program history, he has moved into second place all-time in victories for the Crusaders.

Series Notes: Valparaiso and Milwaukee are meeting for the 11th time in a series dating back to 1993.  The Panthers have won each of the previous 10 contests, including a 5-1 win over the Crusaders at Eastgate Field back on October 4 of this season.  This will be the first meeting ever between the two schools in Horizon League Tournament play.

Wrapping Up Semifinal Action: Valparaiso earned its second Horizon League Tournament victory in school history on Friday evening with a 2-1 victory over second-seeded Wright State in Milwaukee.  Brooke Henderson had a goal and an assist for the Crusaders while Jessie White added the match-winning tally.  Mele Cabral made four saves for the Brown and Gold between the posts as Valpo won its seventh consecutive match.

Scouting Milwaukee: The Panthers advanced to the championship match with a 2-0 victory over Loyola (Chicago) on Friday night in the other semifinal.  Milwaukee, the regular season champion, is led by Sarah Hagen, who entered the tournament with 43 points, tallying 19 goals and five assists.  Kate Megna also entered the tournament with 15 assists and 21 total points for the Panthers.  Jamie Forbes sports a 1.10 goals against average and recorded her ninth shutout of the season in the semifinals.

Another 10-Win Season: Valparaiso has assured itself of its sixth straight 10-win season following the victory against Green Bay in the tournament quarterfinal.  The 11 wins this year are the third most in program history, and a win in the championship would tie the 2005 and 2006 squads with a school-record 12 victories.

Freshmen Scoring Duo: Rookies Rachel Hoaglin and Luisa Desario have paced the Valpo offensive attack this season.  Hoaglin has a team-leading 19 points, including a team-best seven goals and five assists.  She ranks third in the conference in goals and points and fourth in assists.  Desario is fifth in the Horizon League with six goals this year and has 15 total points.  Each of the freshmen has two match-winning goals this year as well.

Win Streak Second Longest Ever: Valpo has won seven straight matches, tied for the second longest streak in school history.  The Crusaders posted eight consecutive triumphs from September 8 through October 1 of 2006.  The current streak began on October 11 with an overtime victory against Detroit, and since then has seen Valpo post five consecutive 2-0 wins.

Henderson Breaks Out in Semifinal Action: Sophomore Brooke Henderson entered Friday night’s match with two career points on a goal earlier in the season.  Against Wright State she tallied three points, scoring a goal and adding her  first career assist.

Cabral Ties Career Mark: Mele Cabral’s eight clean sheets on the season rank second all-time for the Crusaders behind her 10 shutouts last year.  She now has matched Erin Murray’s (2004-2007) career shutout record with 20 on the year.

All-Time Scoring Leaders: Sarah Jewell, Jackie Kondratko, and Jessie White are all in the top-10 on Valpo’s career points list.  Jewell and Kondratko have moved into a seventh place tie with 33 points each while White ranks 10th with 26 points.  Jewell is sixth all-time with 14 career goals while Kondratko is one spot back with 13 career tallies.  White is tied for ninth on the all-time assist list with eight career helpers.

Cabral All-Time Goals Against Average Leader: Mele Cabral qualified for Valpo’s all-time goals against average list earlier this season when she surpassed 2,500 career minutes in goal.  The senior’s 0.89 career mark moves her in front of Erin Murray (2004-2007) for the top spot.  Murray previously held the record with a 1.19 career goals against mark.

Lots of Games: Jessie White has moved into fifth place all-time in matches played with 77 career appearances at Valpo.  The senior has started 72 matches during her career and with a start in the championship will move into a tie for 10th on the all-time list.

Moving Up the Team Leaderboard: Valpo’s 28 goals and 80 points this season rank as the fifth best single season performances by a Crusader team in school history.  The team’s 24 assists are fourth best as well.  Defensively, 24 goals allowed and a 1.18 team goals against average rank fourth on the single season charts while the team’s eight shutouts are second best.