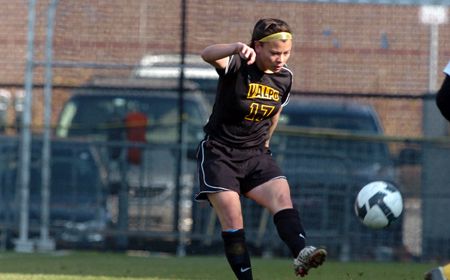 Valparaiso’s seven-match winning streak and season came to an end on Sunday afternoon as the Crusaders dropped a 4-0 decision to Milwaukee in the championship match of the 2009 Horizon League Women’s Soccer Championship.

The Crusaders, the tournament’s third seed, was appearing in their first tournament championship match since joining the conference in 2007.  With the win, Milwaukee, the regular season champion and top seed, earns the league’s automatic bid to the NCAA Tournament.

“This is tough for our kids,” head coach John Marovich said.  “They really battled out there there today and fought throughout.  They overcame a lot this year to have the finish to the season they had.”

Sarah Hagen scored three times in the first half and had four in the match to add to her Horizon League-leading goal total, giving her 24 on the year.  She put the Panthers on the board just 8:53 into the match.  Nicole Sperl sent the ball in from the right side and Hagen headed it into the back of the net.

She then added her second tally just 3:46 later as Louise Vraney tipped the ball past Mele Cabral (Boulder, Colo./Fairview H.S.) and Hagen pushed the ball into the back of the net.  With 21:54 to play before halftime, Laurel Ragalie chipped the ball past the Valpo defense and Hagen finished it for her third goal of the half.

Rachel Hoaglin (Lakeville, Minn./Academy of Holy Angels H.S.) had Valpo’s first chance of the match 28 minutes in, firing a shot from 30 yards out that was saved by Jamie Forbes.

Milwaukee (12-5-3) outshot Valpo 8-2 in the opening half, but both of the Crusaders’ shots were on goal, forcing Forbes to make the stops.

Hagen added her fourth goal of the match with 22:40 remaining, scoring on a header off a cross from Makenzie Gillaspie from the right side and Valpo was unable to find the back of the net to break up the shutout.

The Panthers outshot the Crusaders 14-3 for the match, including a 5-2 edge on goal.  Milwaukee also had the only three corner kicks while holding Valpo without one for the match.

“We wanted to try and change the game and try to take away something they like to do,” Marovich added.  “We tried to limit their shots and we did that holding them to just 14 total.”

Valparaiso finished the season with an 11-9-1 record, posting the third most victories in a single season in school history.