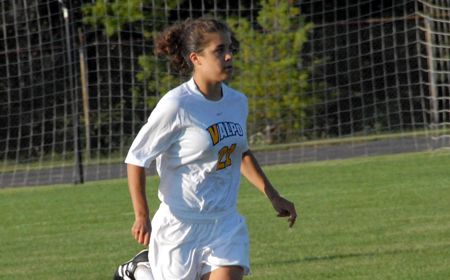 Valparaiso University senior Jackie Kondratko (Granger, Ind./Penn H.S.) is one of 11 student-athletes that has been named to the Horizon League Academic All-League Team in women’s soccer, making her second straight appearance on the team.

Kondratko, a senior mechanical engineering major, carries a 3.95 cumulative grade point average and helped lead the Crusaders to a runner-up finish in the 2009 Horizon League Soccer Championships.  On the field, Kondratko shared team-high honors with seven goals and finished the year with 18 points, second most on the squad.  Four of her seven tallies resulted in match-winning goals.

For her career, Kondratko finished with 13 career goals, seventh most in school history, while her 33 career points are tied for seventh most all-time at Valpo.  Her career concluded with six match-winning goals, tied for fifth on the all-time charts.

In the classroom, Kondratko was named an ESPN The Magazine Academic All-America First Team selection as chosen by CoSIDA (College Sports Information Directors of America) this season.  In addition, she is a two-time ESPN The Magazine Academic All-District V First Team selection.  The last two years she has been named to the Horizon League’s Fall and Spring Academic Honor Rolls as well.

To be eligible for Academic All-League selection, a student-athlete must have a cumulative grade point average of 3.20 or higher and have completed at least one year at the member institution, having earned 24 semester-hour credits.