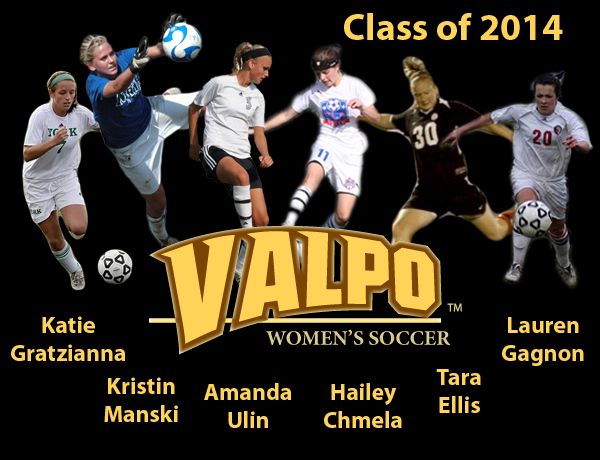 “I am thrilled about this group’s ability to add depth to our program in all thirds of the field,” Marovich said.  “We had such a strong finish to the season which saw us compete in the Horizon League tournament championship match that we wanted to keep this momentum going and I believe this class does that.  The strength of this class is their athleticism and their club and Olympic Development Program experiences. These experiences at such a high level lead me to believe that they will adjust to the college game quite quickly. There is a great deal of personality and character within the group, not just from a soccer standpoint but also in the way they carry themselves as people off the field. They are certainly a good group to be around and they will fit with our team nicely. We’re delighted and energized that they have decided to become part of our soccer family here at Valpo, and I am looking forward to working with them beginning this fall.”

Hailey Chmela is a 5’3” midfielder from Lake Zurich, Ill.  A four-year letter winner and leading scorer at Lake Zurich High School, Chmela was named All-North Suburban Conference, All-Area, and All-Sectional for the Bears.  While competing with Ela Elite, she played a vital role in winning two Illinois State Cup Championship titles, a Midwest Regional Championship in 2006, and a National Final Four appearance.

Marovich’s thoughts on Chmela: “Hailey has good knowledge of the game and her experiences playing with her club team are going to be valuable in her transition to the college game. She has a nice grasp of the work and expectation of a wide player on the field. We are looking for her to give us the ability to explore the widths of the field in a dynamic way.”

Why Valpo for Chmela?: “I decided Valparaiso University is the best fit for me after getting a tour of the campus and meeting the coaching staff. I like the balance between the high expectations of academics and the competitive Division I soccer. I also like the size of the school. Coach Marovich made my decision easy by showing me how passionate he was about the game of soccer”

Tara Ellis is a 5’7” forward from Portage, Ind. Ellis made an immediate impact for the Indians as a four-year letterwinner and four-time All-Duneland Athletic Conference selection, after leading her team in goals and assists. As a senior, she was named Second Team All-State as well as a recipient of the Golden Boot Award.  A key component with Northwest Indiana United, she helped lead her club team to multiple state cup semifinal appearances.  Ellis was a four-year member of the Indiana ODP team as well as a three-year Regional ODP Pool player at Region II camp.

Marovich’s thoughts on Ellis: “We’re very excited that Tara has decided to come to Valpo because she is a local player and someone that I have been able to see develop and grow into a talented soccer player. Her club and ODP experiences have given her the competitive environments which allowed her to develop into the player she is today, and I am looking forward to the opportunity to work with Tara at the college level. She is going to add great toughness and aerial combativeness to the back line. Tara is a versatile player who has the ability to take shots on goal from a distance as well as an ability to score goals. We are looking forward to having Tara on the field and at our University.”

Why Valpo for Ellis?: “I chose Valpo because of the great educational opportunities and the chance to be a part of a great soccer program. The overall atmosphere and warm welcoming from people on campus made it seem like the perfect fit.”

Lauren Gagnon is a 5’1” midfielder from Grand Haven, Mich. Gagnon is a three-time All-Conference, All-Area and All-District selection at Spring Lake High School, as well as an All-Region, All-State Team member her junior year. She also played for the Michigan Hawks with current Crusader Catherine Terrell and is a six-year member of the Michigan ODP team.

Marovich’s thoughts on Gagnon:  “We are thrilled about Lauren choosing Valpo. She comes from a great club program, The Michigan Hawks, and has had tremendous experiences there. We are looking forward to her attacking ability whether it is up front or in the midfield.  She has great vision for the game and a creativity which allows her to play various textured balls forward. I am looking forward to the opportunity to work with her and assist her development.”

Why Valpo for Gagnon?: “I choose Valpo because I really like the coaches, girls on the team, and the size of the school. Valpo is close to home so my family can watch me play.”

Katie Gratzianna is a 5’7” defender from Elmhurst, Ill. A four-year letterwinner and a three-time Defensive Player of the Year for the Dukes of York Community High School, Gratzianna was also named a 2009 All-Sectional player as well as a team captain her senior year. She also played club soccer for The Chicago Fire Juniors with current Crusaders Luisa Desario and Stephanie Matsas.

Marovich’s thoughts on Gratzianna: “With Katie you get a great athlete who is just now starting to peek as a player, so we are excited to get her in and work with her. She is someone who can be an outside back and help to add depth to the back line, but also has the ability to be a good defensive center mid by getting up and winning a head ball. Katie is a tremendous athlete with speed and an excellent work ethic. We are enthusiastic about where her development will take her at Valpo”

Why Valpo for Gratzianna?:  “The reason I picked Valpo to play at was because they have a great team. The girls and the coaches are amazing as well as the program itself. I believe by going there I will be able to help the program and by using my knowledge of soccer and how I play the game. I’m very excited to get started.”

Kristen Manski is a 5’8” goalkeeper from Saint Charles, Ill.  An Illinois State Scholar at Saint Charles North High School, she was an All-Area as well as an All-Conference selection. While playing with Eclipse, she was in net during numerous matches as part of elite tournaments and leagues in the country for club soccer.

Marovich’s thoughts on Manski:  “Kristen is a great athlete with quiet hands who can cover a lot of ground. Certainly her club background has given her excellent experiences and opportunities to be in tough situations and matches. She commands her box and is not afraid to go into traffic because of her great hands and athleticism. Her presence in goal gives the players around her the confidence to be aggressive.”

Why Valpo for Manski?: “From the very first time that I visited Valparaiso University, I knew that it was the school for me. I love the unified atmosphere of the campus and the gorgeous buildings, like the chapel and the library. I met with teachers and counselors that were passionate and excited about school, and were focused on my success. But Valparaiso wasn’t only a school with immense academic opportunities. The athletic opportunities were remarkable as well. The soccer program is filled with determined coaches and talented athletes. Talking to Coach Marovich about the soccer program and watching the Crusaders play made me want to attend Valparaiso University that much more. I am excited to be a part of the exceptional soccer program and to step into a bright future that is ensured academically.

Amanda Ulin is a 5’7” defender from Solon, Iowa. A three-year letterwinner and three-time All-Conference selection for the Spartans, Ulin led her team in assists all three years. In her 2007 and 2008 campaigns she was named the Spartan’s Most Valuable Player as well as Honorable Mention in the state of Iowa. As a junior she was a First Team All-State selection.  A stand out athlete for Solon High School, she was named Solon High School Female Student-Athlete Most Valuable Player in 2008. An ODP State participant since 2003, Ulin was a Regional ODP Camp attendee since 2005.

Marovich’s thoughts on Ulin: “Amanda is a great athlete who I have had the ability to see play at various levels, whether it’s ODP or the club level. She has good pace coming out of the back or as a forward. She has the ability to score goals, which she has done at the high school level. I am really looking forward to her coming in and adding an attacking mentality. She is also a product of the VIP summer camp, which allowed us the chance to spend time with her, get to know her and see that she was a great fit. We are looking forward to her being on campus in the fall.

Why Valpo for Ulin?: “I chose Valpo because of the campus, the academics, and the athletics. I love the size of the campus, how compact and easy it is to get around and the schools new facilities. I like the small size of the student body because it reminds me of my home. I love the academic respect the school has and the expectations they hold for their students. I like the exercise program they have to offer as well as the pre-med program. I love the soccer team and the coaching staff, and the positive team (family) environment they encourage and nurture. I also like the open door policies professors have and how they are always available to help their students achieve their best.”