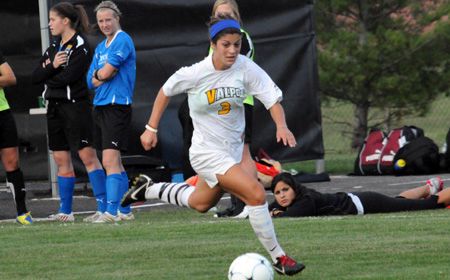 A goal by Lauren Patterson with just over 10 minutes to play proved to be the difference on Sunday afternoon as Wright State defeated Valparaiso 1-0 at Eastgate Field.

“We have to find a way to score goals and right now we’re just not doing that,” Valpo head coach John Marovich said after the match.

The Crusaders had the first scoring chance of the match, midway through the first half.  Rachel Hoaglin (Lakeville, Minn./Academy of Holy Angels H.S.) fired a shot that Meghan Hackerson made a diving save on to keep the match scoreless into intermission.

Luisa Desario (Bartlett, Ill./Bartlett H.S.) had another chance to put Valpo in front with about 30 minutes to play, just missing the inside of the near post from 10 yards out.

Kristen Manski (Saint Charles, Ill./North H.S.) kept the Crusaders in the match late in the second half, making a diving stop as well as coming out of the goal to deflect another attempt.

However, Patterson headed home a corner kick off of the foot of Brittany Persaud with 10:26 remaining in regulation for the match’s lone goal.

Wright State (8-8, 3-3 Horizon) outshot the Crusaders 13-11 for the contest, and held a 6-4 advantage on goal.  Manski turned aside five shots for the Brown and Gold while Hackerson made three saves and Brooke McCurdy made one in the second half for the Raiders.  The visitors held an 8-1 advantage in corner kick opportunities in the match as well.

Valparaiso (5-7-4, 1-4-1) closes out the regular season with a pair of matches next weekend at Eastgate Field, beginning on Friday afternoon when the Crusaders host Cleveland State.  Kickoff is set for 3 p.m.

Match Notes: Desario had three shot attempts and is now tied with Allison Swanson (2002-2005) for seventh on the career charts with 102 … Wright State leads the all-time series 8-1.