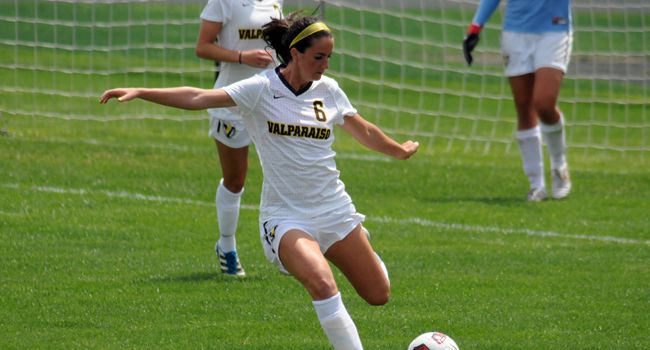 Rachel Hoaglin had a goal and an assist for the Crusaders in the victory. (Ray Acevedo)
IPFW at Valparaiso | August 21, 2011
Related Links
Related Links
Brooke Henderson heads home the first goal of the match. (Sammy Olson)

Luisa Desario (Bartlett, Ill./Bartlett H.S.) and Rachel Hoaglin (Lakeville, Minn./Academy of Holy Angels H.S.) each tallied a goal and an assist and four different Crusaders scored goals lifting Valparaiso to a 4-2 victory over IPFW on Sunday afternoon at Brown Field.

“The first win of the season is always the hardest to get,” head coach John Marovich said after the match.  “It is great to get it during the first weekend so it’s not hanging over your head throughout the next week.”

Valpo jumped on top quickly, scoring three times in a 15-minute span midway through the opening stanza.   Brooke Henderson (Westlake, Ohio/Westlake H.S.) put the Crusaders on the board in the 22nd minute, heading home a corner kick from the foot of Trisha Wladecki (Avon Lake, Ohio/Avon Lake H.S.).

The Crusaders added to the lead at the 35:03 mark as Desario took a long pass ahead from Hoaglin and fired from the top of the box past Mastodon netminder Jessica Schein to make it 2-0 Crusaders.  Just 1:23 later, Desario returned the favor, sending a cross to Hoaglin at the top of the box and the junior lofted the ball over Schein’s head for her first tally of the season.

“I really liked the fact that we were able to finish off our chances in the first half,” Marovich added.  “We have dealt with different styles of play against us so far this year.  Today we got a team that pressured us more and we dealt with it well.”

IPFW found the scoreboard with 6:07 remaining before intermission as Tylar Allison scored on a free kick from 35 yards out, making it 3-1 at the break.

Valpo outshot the Mastodons 7-4overall in the opening 45 minutes.

IPFW (1-1) cut the Valpo advantage to one midway through the second half as Tara O’Toole took a feed in the box from Rhea Proctor and found the far corner from 15 yards out.

Valpo added an insurance tally with 18:36 remaining though, as Abby Kenyon’s (Canton, Ohio/Jackson H.S.) long throw-in found the head of Casey Pedersen (Northville, Mich./Mercy H.S.) in the goalmouth, and the fifth-year senior flicked the ball into the back of the goal.

“What makes this team great is that four different players were involved in the scoring today,” Marovich added.  “Even those players that didn’t score contributed in different ways.  “Hailey Chmela (Hawthorn Woods, Ill./Lake Zurich H.S.) and Kristen Warner (Lombard, Ill./Glenbard South H.S.) did a great job off of the bench.”

The Crusaders finished the match with a 15-11 shot advantage, including an 8-3 edge on target.  The Brown and Gold also won seven corner kick opportunities in the match.

Valparaiso (1-1) will wrap up its three-match homestand next Sunday afternoon hosting Evansville. Kickoff is set for 1 p.m. at Eastgate Field.

Match Notes: The four goals were Valpo’s highest scoring output since tallying four at IPFW last season in a 4-2 victory … the Crusaders have now won five straight matches against the Mastodons and lead the all-time series 8-2-1 … Rachel DeFrank (Mason, Ohio/Mason H.S.) earned her first collegiate victory in goal for the Crusaders … Warner made her collegiate debut for the Brown and Gold … Hoaglin’s match-winner was the third of her career … Desario’s goal was the 11th of her career, tying her for ninth all-time at Valpo … Desario also has 26 career points, tied for 10th on the all-time charts.