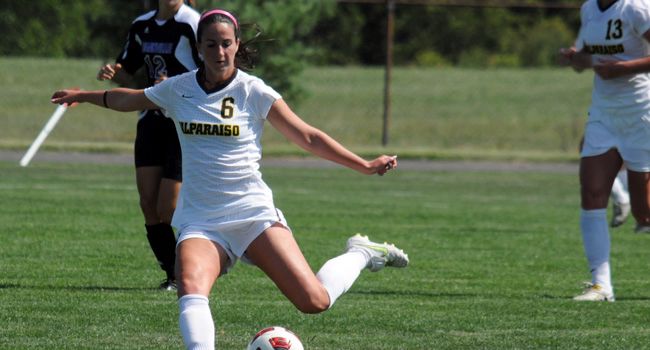 Valparaiso continued its four-match road trip on Friday evening, but returned to the Hoosier State and battled IUPUI to a 1-1 deadlock at Kuntz Stadium in Indianapolis, Ind.

“It was a great environment that they had for soccer tonight,” head coach John Marovich said of the 912 fans in attendance.  “It was good for us to experience it and deal with that pressure.  We walked away with a tie on the road which is good preparation for Horizon League action when you want to gain points away from home.”

The two sides battled through a scoreless opening 45 minutes in which Valpo outshot the Jaguars 4-1.  The Crusaders had the lone shot on goal in the first stanza, recorded by Kelsey Draper (Perrysburg, Ohio/Perrysburg H.S.), but Kristin Hasely turned it aside.

The Crusaders struck quickly in the second half, just 2:13 out of the locker room.  Valpo put the Jaguars under pressure and the defensive clearing attempt rattled off of the cross bar.  Rachel Hoaglin (Lakeville, Minn./Academy of Holy Angels H.S.) knocked the ball down and scored in near bicycle kick fashion from inside of five yards out.

Hoaglin’s goal was the 10th of her career and she moved into a tie her with teammate Luisa Desario (Bartlett, Ill./Bartlett H.S.) for 10th place on the all-time scoring list with 26 career points.

IUPUI (1-3-2) answered just over seven minutes later.  Kristin Pierce took a set piece and connected with the head of Alicia Brock who found the near post to tie the match at one.

The Jaguars outshot Valpo 7-5 in the second half, but Kristen Manski (Saint Charles, Ill./North H.S.) made three saves to help force overtime.

In the first extra session, Brooke Henderson (Westlake, Ohio/Westlake H.S.) had a quality header attempt, but the ball was saved by the Jaguar backline.  The Crusaders had three more shots in the second overtime, but were unable to find the back of the net and registered their first draw of the season.

The Crusaders finished the match outshooting the Jaguars 14-11 and had a 5-2 advantage in corner kick opportunities.

“We have a quick turnaround now for Sunday,” Marovich concluded.  “We need to rest up for another battle.”

Valparaiso (2-3-1) will travel to Charleston, Ill. on Sunday afternoon to conclude the four-match road trip against the Panthers of Eastern Illinois.  Kickoff is set for 1 p.m.

Match Notes: Valpo is unbeaten in the last seven meetings between the two schools (6-0-1) … the Crusaders hold a 9-3-2 all-time series edge … Hoaglin’s goal was her second of the season and she has a team-leading five points this year … Desario had four shot attempts, and passed Jackie Kondratko (2006-2009) for sixth place all-time at Valpo with 124 for her career … the Crusaders have had six of their last seven, including the last four, overtime matches end in draws.