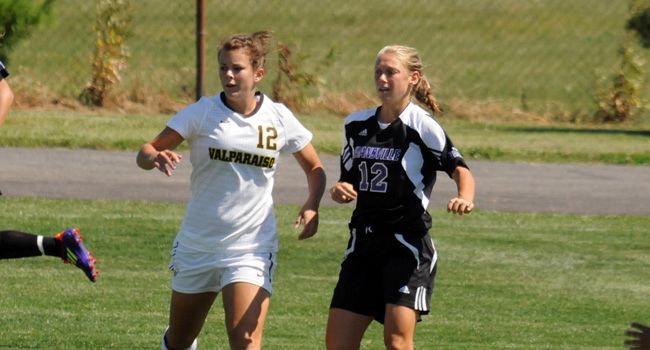 A pair of goals less than three minutes apart midway through the first half proved to be the only scoring on Sunday afternoon, but it was more than enough for Valparaiso as the Crusaders registered their second shutout of the season, 2-0, over Eastern Illinois at Lakeside Field in Charleston, Ill.

“I thought this was a good win today,” head coach John Marovich said after the match.  “I am really happy with the fact that despite coming off of our overtime match on Friday, we came out with a lot of energy to start.  We wrapped up a four-game road trip 2-1-1.  Any time you get seven points on the road during a trip like this is a real positive.”

Senior Mikki Nuccio (Ortonville, Mich./Brandon H.S.) recorded the match-winner with her first goal of the season for the Crusaders at the 23:51 mark.  She gathered a ball played into the right side and beat goalkeeper Jessica Taldone from 10 yards out to put Valpo on top 1-0.

“The key to our victory today was the spark by some of the kids off of the bench,” Marovich said.  “They made a difference in us getting our first goal.”

Rachel Hoaglin (Lakeville, Minn./Academy of Holy Angels H.S.) added her second goal of the weekend just 2:10 later.  She took a cross from Luisa Desario (Bartlett, Ill./Bartlett H.S.) from the left side of the end line and headed the ball into the back of the net.

“Desario and Hoaglin have been a very good combination for us this year,” Marovich added.

Valpo took the 2-0 lead into intermission having outshot the Panthers 9-5 in the opening 45 minutes, including a 4-1 advantage on goal.  The Crusaders continued to control the match in the second half, but was unable to add any more goals and left with the two-goal victory.

Kristen Manski (Saint Charles, Ill./North H.S.) made three saves in goal for the Crusaders in the victory, notching her first shutout of the season.  The sophomore netminder now has six career clean sheets, moving her into fourth place alone on Valpo’s career shutout chart.

Valparaiso (3-3-1), having returned to the .500 mark for the first time since Sept. 2, will return to Eastgate Field on Friday afternoon to open Horizon League action.  Kickoff against Green Bay is set for 4 p.m.

Match Notes: Eastern Illinois leads the all-time series 7-3-1 but Valpo has won the last three matches between the two schools … Nuccio’s match-winner was the second of her career … her goal was the third in her four years at Valpo … Hoaglin now has a team-leading three goals and seven points on the season … Hoaglin has moved into a tie for ninth all-time with 11 career goals … she has 28 career points, 10th most in school history … Desario’s assist was her second of the season and seventh of her career … the junior has 27 career points.