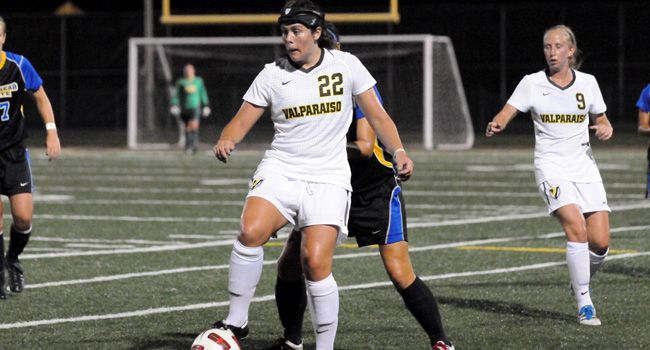 This Week in Crusader Soccer: After four matches away from home, Valparaiso returns to Eastgate Field on Friday afternoon to face Green Bay in the Horizon League opener for both schools.  The Crusaders then step back out of conference play on Sunday with a trip to Ohio to battle Bowling Green.

On the Air: Friday’s match against Green Bay will be carried live on WVUR (95.1-FM, Valparaiso) as well as online at valpoathletics.com.  Sunday’s contest at Bowling Green will not be broadcast through either media outlet.  Live stats will be available through valpoathletics.com for both matches though.

Head Coach John Marovich: John Marovich holds a 29-26-10 record both overall and with Valpo in his fourth season at the helm of the Brown and Gold.  Just the third head coach in program history, Marovich has the best winning percentage (.523) ever at Valpo, and ranks second in total victories.

Wrapping Up Last Week’s Action: Rachel Hoaglin scored a pair of goals on the weekend as Valparaiso went 1-0-1 to conclude its four-match road trip.  The Crusaders posted a 1-1 draw at IUPUI on Friday after Hoaglin posted the first goal of the match early in the second half.  On Sunday in a 2-0 victory at Eastern Illinois, Mikki Nuccio scored the match winner in the 24th minute and Hoaglin added an insurance goal just 2:10 later.  Kristen Manski earned her first shutout of the season against the Panthers and made three saves in each match.

Scouting Green Bay: The Phoenix have lost three straight matches, all by 1-0 scores, including contests at South Dakota State at Northern Iowa last weekend.  Hekla Palmadottir leads the way for Green Bay offensively with eight points, having scored three times and adding a pair of assists.  Hannah Kernen has four points, including two assists.  Maddie Drusch has logged a majority of the minutes in goal for the Phoenix, posting a 0.80 goals against average and an .887 save percentage while recording three shutouts.

Scouting Bowling Green: The Falcons split a pair of matches last weekend losing at Michigan State on Friday before downing Youngstown State 2-1 on the road Sunday afternoon.  Bowling Green hosts IPFW this Friday before entertaining the Crusaders.  Alyssa Zuccaro and Sarah VonderBrink lead the Falcons with four points each.  Zuccaro has two goals while VonderBrink has added a pair of assists.  Becca Ison has played every minute in goal, notching a 1.97 goals against average and a .770 save percentage.

Hoaglin Has Big Weekend: Rachel Hoaglin scored in both Valpo matches last weekend to give her a team-leading three goals and seven points.  The junior now has 11 career goals and 28 career points.

Nuccio Provides Match-Winner: Mikki Nuccio scored her first goal of the season on Sunday at Eastern Illinois and it proved to be the Crusaders’ match-winner.  The tally was the senior’s first goal since her freshman season, when she had a pair of markers, including one match-winner.

A Dynamic Connection: Luisa Desario and Rachel Hoaglin connected on yet another goal on Sunday when Desario drew an assist on Hoaglin’s tally.  The duo have combined for four goals on the season, with the other picking up an assist on three of the four tallies.

Valpo in Horizon League Openers: The Crusaders are beginning their fifth season as a member of the Horizon League, still looking for a win in the conference opener.  Twice Valpo has fallen to Butler to start league play while also dropping matches at Wright State and Detroit.  Last year the Crusaders suffered a 2-0 setback at Detroit.  The Crusaders have not started Horizon League play at home since 2008 when the Brown and Gold entertained Butler.

Moving Onto the All-Time Scoring Charts: Rachel Hoaglin has moved into 10th place on Valpo’s career list with 28 points during her three-year Crusader career.  Hoaglin is one point ahead of teammate Luisa Desario, who has 27 career points.  Lori Johnson (2005-2008) is ninth on the all-time list with 32 career points.

Keeping Then Clean: Kristen Manski has moved into fourth place along with six career shutouts after her blanking of Eastern Illinois on Sunday.  Manski is one clean sheet shy of Amy Cavanaugh (1996-1999) for third place all-time in a Crusader uniform.

This and That: Seven matches into the season 10 different players have already tallied at least one point after 10 players total registered a point in 2010 ... Luisa Desario leads the Crusaders with 22 shot attempts and has nine in her last two matches ... Valpo returns home next weekend to host the Crusader Classic, the first in-season tournament ever hosted by the Crusaders.