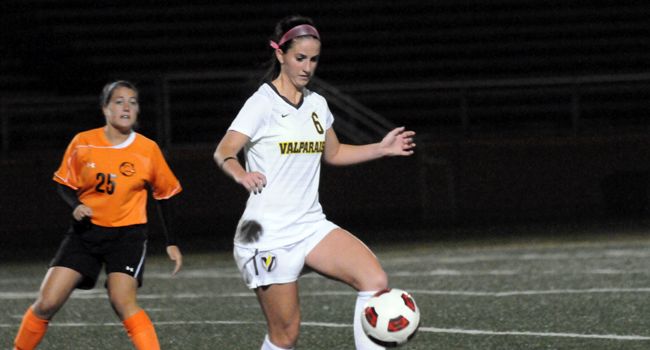 Valparaiso fought back from a goal down to tie the match with under 15 minutes remaining on Friday evening, but Campbell scored the match-winner with just over five minutes left to down the Crusaders 3-2 at Brown Field on the opening night of the Crusader Classic.

With the match tied 1-1 at halftime, Ashley Clark started the second half with a goal for the Camels just 40 seconds out of the break to give the visitors a one goal advantage.

The Crusaders got the equalizer with 14:42 remaining as Brooke Henderson (Westlake, Ohio/Westlake H.S.) spun at the top of the box and fired the ball past Camel goalkeeper Ryann Torrero far post.  For the senior the unassisted tally was her second goal of the season.

“I liked the fact that despite giving up a goal early in the second half, we at least bounced back to tie the match,” head coach John Marovich said after the match.  “It shows that we had fight and character in us.”

Campbell (5-3) found the match-winner with just over five minutes to play.  Line Berntsen got free in the box and shot over Kristen Manski (Saint Charles, Ill./North H.S.) for the marker.  Manski got her hands on the ball to slow it up, but could not prevent the ball from finding the back of the net.

“We need to be better at not giving away chances late in the game,” Marovich added.  “That is not a recipe for success and has hurt us several times now this year.  We had enough chances tonight to win, but we didn’t put ourselves in a good situation.”

Valpo continued with pressure and had one last opportunity late.  Becky Clever (Cincinnati, Ohio/Madeira H.S.) fired a shot from 25 yards out that rattled off of the crossbar with just four seconds remaining and stayed out.

“Becky had a great chance at the end,” Marovich added.

The Crusaders scored first on Friday night, as Rachel Hoaglin (Lakeville, Minn./Academy of Holy Angels H.S.) found the back of the net for the fifth straight match at the 23:32 mark.  She scored from the top of the box after Catherine Terrell’s (Brighton, Mich./Brighton H.S.) free kick from the left side of the goal, near the touchline, made it all the way through the box to Hoaglin.

Campbell tied the match with 5:23 to play before halftime as Annabelle Gibney scored on a penalty kick following a Crusader handball in the penalty box.

Valpo outshot the Camels 11-4 in the opening stanza, including 7-3 on goal, and finished the match with a 16-10 shot advantage.  The Crusaders also had five corner kick opportunities on the night.

Manski finished with three saves for the Brown and Gold while Torrero made seven stops for the Camels.

Valparaiso (5-4-1) will return to action on Sunday afternoon at Eastgate Field when the Crusaders face Air Force to conclude the Crusader Classic.  Kickoff is set for 1:30 p.m.

Match Notes: Air Force and IUPUI played to a 2-2 double-overtime draw in the opening match of the Crusader Classic … this was the first meeting ever between Valpo and Campbell … Hoaglin, the reigning Horizon League Player of the Week, leads the Crusaders with six goals on the season, tying her for second in the Horizon League … Hoaglin moved into seventh place all-time with 34 career points for the Crusaders … her goal was the 14th of her career, tying her with Sarah Jewell (2006-2009) for sixth all-time … Henderson’s goal was the fifth of her career and gives her 14 career points … Terrell had her team-leading fourth assist of the season, tying her for ninth on the single season charts.