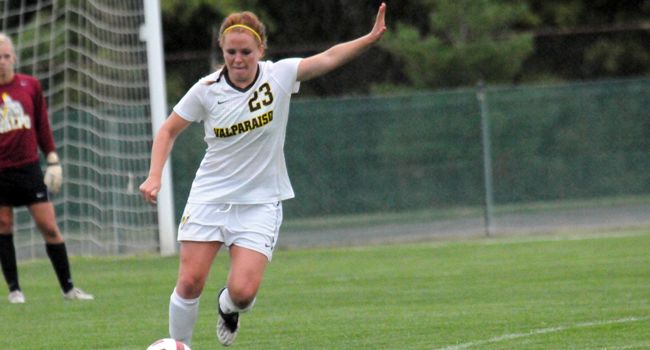 This Week in Crusader Soccer: A pair of Horizon League matches are on the slate for Valparaiso this week beginning with a showdown between the two remaining unbeatens in the conference.  On Wednesday the Brown and Gold travels to Milwaukee to face the 12th-ranked Panthers before returning home on Sunday to entertain Cleveland State.

On the Air: Wednesday’s match at Milwaukee can be seen live online through the Horizon League Network. A link will also be provided at valpoathletics.com. Sunday’s match against Cleveland State will not be broadcast over any media outlet.  Live stats will be available through valpoathletics.com for both matches as well.

Head Coach John Marovich: John Marovich holds a 32-27-11 record both overall and with Valpo in his fourth season at the helm of the Brown and Gold.  Just the third head coach in program history, Marovich has the best winning percentage (.536) ever at Valpo, and ranks second in total victories.

Series Notes: Valparaiso is looking for its first win ever against Milwaukee.  The Panthers have won the previous 12 meetings dating back to 1993 and won last year’s contest 5-0 in Wisconsin.  All-time, the Panthers are 7-0 against the Crusaders in Milwaukee.  Valpo holds a 6-1 all-time advantage against Cleveland State dating back to 2004.  The Vikings earned their lone win of the series last year, 2-0 at Eastgate Field.  The Crusaders are 3-1 all-time against the Vikings in Valparaiso.  Valpo’s last win against Cleveland State came Oct. 18, 2009 in Ohio.

Wrapping Up Last Week’s Action: Luisa Desario scored the lone goal of the match last Wednesday evening as Valparaiso defeated Loyola (Chicago) 1-0 in the Windy City to remain unbeaten in Horizon League action.  Kristen Manski made three saves in goal for the Crusaders while recording the shutout.

Scouting Milwaukee: The Panthers have won five straight matches following a 3-1 triumph at Wright State on Saturday.  Milwaukee is ranked 12th nationally in the NSCAA poll.  Sarah Hagen leads the Panthers with 15 goals, including eight match-winners, and 34 total points while Keara Thompson has handed out eight assists and tallied 12 points total.  Laurel Ragalie has added four goals for a team that has scored 28 times on the year.  In goal, Jamie Forbes has played every minute, posting a 0.65 goals against average, an .860 save percentage, and six shutouts.

Scouting Cleveland State: The Vikings enter the week looking for their first victory in Horizon League play and are coming off of a 1-1 draw at home against Loyola (Chicago) on Friday evening.  Cleveland State travels to Butler on Wednesday before heading to Valpo on Sunday.  Natalie Daniels leads Cleveland State with 10 points on the season, including six assists, while Taylor Vidovic has a team-leading four goals.  Becky Williams has played the majority of the minutes in goal, sporting a 1.17 goals against average and a .780 save percentage while registering three shutouts.

One of Two Unblemished in League Play: While Valpo is tied with Detroit and Butler with six points in the Horizon League standings, the Crusaders are one of just two schools in the conference without a loss or a tie on their resume.  The other unbeaten is Valpo’s opponent on Wednesday night, the 3-0 Milwaukee Panthers.

Manski Keeps Opponents Off of the Scoreboard: Kristen Manski has recorded shutouts in five of Valpo’s last six matches following the 1-0 victory at Loyola (Chicago) last Wednesday.  The sophomore netminder has a sparkling 0.77 goals against average on the season, ranking 44th nationally. Her .818 save percentage also ranks third in the Horizon League.  As a team the Crusaders have recorded six total clean sheets this year, tied for fourth most in program history.

Scoring Early Key to Valpo’s Success: Valparaiso is a perfect 5-0 this season when taking the lead into intermission.  The Crusaders are also 6-1-1 on the year when scoring the match’s first goal.

Pencil Them in the Lineup: Tracy Roos has started all 70 matches during her four year career with the Brown and Gold on the backline.  Fellow defender Janine Lytle has also started all 51 matches since she joined the program prior to the 2009 season.

Moving Onto the All-Time Scoring Charts: Rachel Hoaglin has moved into a seventh place alone on Valpo’s career scoring list.  Hoaglin has 34 points during her three-year Crusader career, passing Sarah Jewell (2006-2009) and Jackie Kondratko (2006-2009), each of whom had 33 points at Valpo.  She is one point shy of Lindsay Holley (2001-2004) for sixth on the all-time charts and two points behind Elizabeth Tatro (1993-1996) for a spot in the top-five.  Luisa Desario needs just one more point to move into the top-10 all-time.  She enters the weekend with 31 career points.

Record Book Watching: Luisa Desario ranks sixth in school history with 141 career shot attempts, needing four more to match Lisa Springs (1998-2001) top-five total of 145.  Desario is also tied for eighth on the all-time list with five match-winning goals in her career after recording her most recent one at Loyola (Chicago).

This and That: Valpo has tied its last five overtime contests dating back to last season ... all-time the Crusaders are 14-15-27 in extra session matches ... 47.7% of Valpo’s shot attempts this season have been on goal ... Valpo has won 74 corner kick opportunities this season while surrendering just 40 ... in the first half the corner advantage is 41-13.