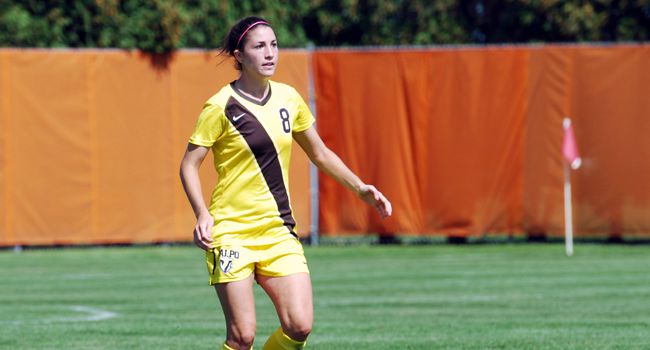 Laura Romberg is one of two Crusaders to play every minute this season. (John Enright)
Valparaiso at Detroit | October 15, 2011
Related Links
Related Links

This Week in Crusader Soccer: Midway through the Horizon League schedule Valparaiso sits in the thick of the conference race with a 3-1 mark.  The third place Crusaders (nine points) travel to second place Detroit (12 points) on Saturday afternoon looking to move one step closer to securing a spot in the conference tournament at year’s end.

On the Air: Saturday’s match at Detroit will not be broadcast over any media outlet.  Live stats will be available through valpoathletics.com for the match though.

Head Coach John Marovich: John Marovich holds a 33-28-11 record both overall and with Valpo in his fourth season at the helm of the Brown and Gold.  Just the third head coach in program history, Marovich has the best winning percentage (.535) ever at Valpo, and ranks second in total victories.

Series Notes: Detroit leads the all-time series with the Crusaders 5-2 dating back to 1993.  The Titans won last year’s meeting in the Motor City 2-0.  Valpo’s last win against Detroit came in 2009, a 3-2 overtime triumph at Eastgate Field. The Titans hold a 3-0 advantage against Valpo all-time in Detroit.

Wrapping Up Last Week’s Action: Milwaukee scored a pair of second half goals on Wednesday evening as the 12th-ranked Panthers defeated the Crusaders 2-0 in Wisconsin.  Valpo rebounded on Sunday afternoon with a 1-0 victory over Cleveland State at Eastgate Field.  Mikki Nuccio scored the match winner with just 2:28 to play in regulation with Tricia Wladecki and Rachel Hoaglin picking up the assists.  Rachel DeFrank registered her first collegiate shutout.

Scouting Detroit: The Titans have won three straight matches, all via shutout, following a 1-0 win at Loyola (Chicago) on Sunday afternoon.  Detroit is a perfect 5-0 at home this season.  Abby McCollum leads Detroit with 20 points on six goals and eight assists while Alyssa Riley has also scored six times.  Kaitlyn Quarrell has added five goals for the Titans.  Detroit leads the Horizon League with 42 goals on the year as a team.  In goal, Nora Abolins has played the majority of the minutes, and carries a 0.92 goals against average and an .810 save percentage.

League Race Heating Up: Valpo enters the weekend in third place in the Horizon League standings with nine points, three points behind Detroit.  The Crusaders are tied with the Titans in the loss column though, with Detroit having played one more match.  The race to make the Horizon League Tournament is tight as well, with three teams, Wright State, Cleveland State, and Green Bay tied for the final two spots with four points each.  Valpo is exactly halfway through the conference slate, having played four of its eight league matches to this point.

DeFrank Steps Up Big: Backup goalkeeper Rachel DeFrank stepped into a big role last week and made the most of her opportunities.  She came into the match in relief early in the second half against #12 Milwaukee and surrendered just one goal in nearly 44 minutes of action.  On Sunday, making her third start of the season, she posted her first collegiate shutout with her clean sheet against Cleveland State.  DeFrank stopped seven of the eight total shots she saw last week.

Nuccio’s Goals are Key: Mikki Nuccio scored her second goal of the season on Sunday afternoon, the lone tally of the match.  Both of her goals this season have been match-winners (the other coming at Eastern Illinois).  For the senior’s career, three of her four goals have resulted in match-winners.

Seven Shutouts Fourth Most: With Valpo’s seventh shutout of the season on Sunday against Cleveland State, the Crusaders have registered the fourth most clean sheets as a team in a single season in program history.  The 2007 and 2009 squads each shut out eight opponents while the 2008 team set the school mark with 10 clean sheets.

Scoring Early Key to Valpo’s Success: Valparaiso is a perfect 5-0 this season when taking the lead into intermission.  The Crusaders are also 7-1-1 on the year when scoring the match’s first goal.

Pencil Them in the Lineup: Tracy Roos has started all 72 matches during her four year career with the Brown and Gold on the backline.  Fellow defender Janine Lytle has also started all 53 matches since she joined the program prior to the 2009 season.  This season the duo has been joined by Amanda Ulin and Laura Romberg, each of whom has started every game in the back as well.  Romberg and Roos have played every minute this season.

Hoaglin on the All-Time Scoring Charts: Rachel Hoaglin has moved into a seventh place alone on Valpo’s career scoring list.  Hoaglin has 36 points during her three-year Crusader career, tied with Elizabeth Tatro (1993-1996) for fifth on the career list.  She is four points shy of Lisa Springs (1998-2001) for fourth on the all-time charts.

Desario in the Record Books Too:  Luisa Desario has scored 12 goals, tied with Lori Johnson (2005-2008) for ninth all-time at Valpo.  Desario is also one assist shy of the all-time list with seven career helpers, trailing Lori Johnson (2005-2008), Laura Murphy (2005-2008), Jesse White (2006-2009) and current teammate Rachel Hoaglin for ninth place.  The trio all had eight assists.  Desario also needs just one more point to move into the top-10 all-time.  She enters the weekend with 31 career points.

More Record Book Watching with Desario: Luisa Desario has moved into the top-five in school history with 148 career shot attempts, passing Lisa Springs (1998-2001).  Desario is 17 shots behind Elizabeth Tatro (1993-1996) for fourth on the all-time charts.  Desario is also tied for eighth on the all-time list with five match-winning goals in her career after recording her most recent one at Loyola (Chicago).

This and That: Valpo has tied its last five overtime contests dating back to last season ... all-time the Crusaders are 14-15-27 in extra session matches ... 47.3% of Valpo’s shot attempts this season have been on goal ... Valpo is outscoring its opponents in the first half 11-3 on the season ... Luisa Desario leads Valpo with 41 shot attempts this season, 21 of which have been on goal.