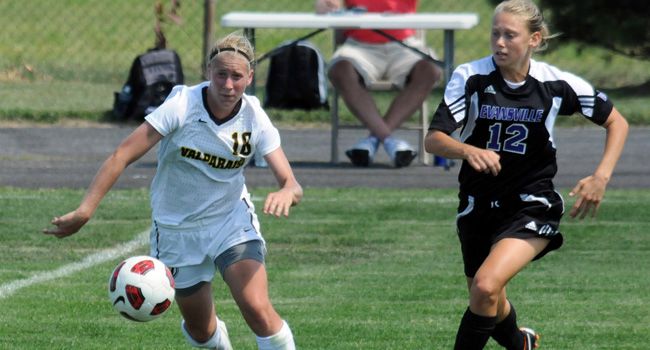 Valpo fell behind 1-0 in the first half.  A strong second half start by Northwestern gave the Wildcats a 2-0 lead.

Valpo quickly went on the attack and was able to get a goal back off the head of Kelsey Draper (Perrysburg, Ohio/Perrysburg H.S.) from a Catherine Terrell (Brighton, Mich./Brighton H.S.) cross. Valpo’s tying goal came from a Janine Lytle (Wooster, Ohio/Wooster H.S.) header, off of a corner kick taken by Terrell.

With the score tied 2-2 the two teams battled back and forth but it was Valpo’s Abby Kenyon (Canton, Ohio/Jackson H.S.) that was able to put in the winning goal with just five minutes to go in the game.

Overall the team went 3-2-2 on the spring defeating Akron, Indiana and Northwestern. The team will return to Valparaiso in early August for preseason in preparation for their exhibition opener on August 7against Northern Illinois.

A big thanks from Valpo women’s soccer goes out to all the alumni that were able to attend this past week’s match and support the current team.