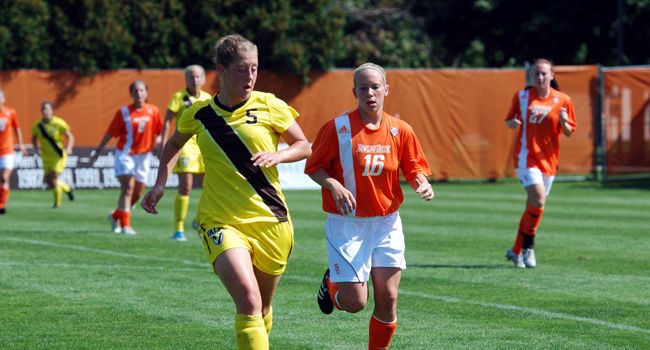 Another dominant performance by the Valparaiso women’s soccer team led to a 1-0 victory over Towson to close out the opening weekend of play, as senior Trisha Wladecki (Avon Lake, Ohio/Avon Lake) slotted home a penalty kick in the 79th minute for the game’s lone goal.  With the shutout, the Crusaders have posted two straight clean sheets to open a season for the first time in program history.

“Sunday games are always physically and mentally demanding because after playing on Friday, you have to recover quickly and get yourself going again,” said Crusader head coach John Marovich.  “I thought our team handled it really well today.  We talked about coming into the game with a wise mind, so that when your body tells you to quit, your mind keeps you going forward.”

The Crusaders enjoyed the better of the game throughout Sunday afternoon’s fixture, ending the contest with significant advantages in shots (14-4) and corner kicks (7-1).  But the game remained scoreless with the clock ticking down towards 10 minutes to play, when freshman Jenny Fassbinder (Hudson, Wis./Hudson) came up with the big play.

Fassbinder came up with possession following a Towson punt and ran the ball into the left side of the box, where she was then taken down from behind by a Tigers defender.  The referee immediately pointed to the spot, and Wladecki stepped up and calmly knocked it into the lower left corner of the goal for the eventual match-winner.

“As the game went along more in our direction, I think our fitness and mental attitude really helped us come out with the result,” said Marovich.  “Towson’s goalie made some big saves throughout the game to keep the game scoreless.  To get the penalty kick and convert it, that’s a wise mind, knowing you just have to tuck the finish away as a reward for the chances you created all game.”

While the Crusaders scored just the one goal, they had numerous chances for more throughout the match.  As was the case Friday night, part of it was a bit unlucky, as a header by senior Rachel Hoaglin (Lakeville, Minn./Academy of Holy Angels) hit the crossbar and bounced over in the 20th minute.  Also, solid goalkeeping again kept the Crusaders from adding to their score.  A shot from 20 yards from the left side by Fassbinder in the 37th minute was punched over the bar thanks to a leaping effort by Towson goalkeeper Erin Quinn, who also made a diving save on a header by freshman Sarrah Ludwig (Downers Grove, Ill./South) in the 56th minute.

It was another solid effort by the Crusader defense as well on Sunday, surrendering just four shot attempts, none of which came in the opening 45 minutes.  Two of the shots were on target, with junior goalkeeper Kristen Manski (Saint Charles, Ill./North) making both saves to earn her second straight shutout.  Quinn made five saves in all for the Tigers.

“I though Sarrah changed the game off the bench today,” said Marovich.  “We weren’t very good in the air over the first 20 minutes, but then Sarrah came in and was massive in the air for us.  Jenny was very good down the flank as well.  She was a bit tricky in possession, had one really good shot and also got us the PK.  I thought that those two came off the bench and allowed us to get some rest for players who went the full 90 on Friday.”

Valparaiso (2-0-0) closes out a three-match homestand on Friday evening at Brown Field at 7:30 p.m. against Kent State.  The game will be broadcast live on WVUR, 95.1 FM, Valparaiso and online at www.valpoathletics.com, which will also have a link for live stats.

Noteworthy: Valpo starts the season 2-0-0 for just the second time in program history (2010) ... Wladecki’s goal was her first since scoring on Aug. 21, 2010 at UMKC ... it also was Wladecki’s first career match-winner ... freshman Shelby Oelschlager made her Crusader debut Sunday, playing 40 minutes off the bench in the second half ... the Crusaders have now outshot their opponents 40-9 through the season’s first two games ... Manski earned her 14th career clean sheet.