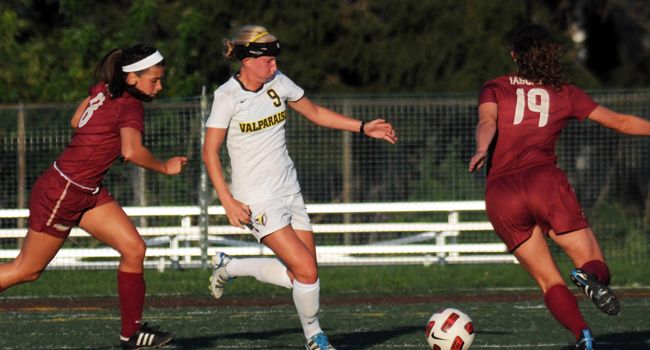 This Week in Crusader Soccer: Valparaiso returns home for a pair of matches this weekend, hosting a pair of fellow mid-major opponents. The Crusaders take on Western Michigan on Friday night at Brown Field, and then move to Eastgate Field for the first time this season on Sunday afternoon to face Bowling Green.

Previously: The Valparaiso women's soccer team got a 75th minute goal from senior Luisa Desario on Sunday afternoon at Iowa, but it only served as a late consolation tally, as the Crusaders fell by a 3-1 count to the host Hawkeyes.

The Road Ahead: The non-league slate concludes with three straight road matches, starting with a game at IPFW Sept. 16. Valpo then flies out to California to take on San Francisco (Sept. 21) and Saint Mary’s (Sept. 23).

Following the Crusaders: Friday’s match against Western Michigan will be the first of two Crusader women’s soccer matches this season with a live video webstream via the Horizon League network, while Sunday’s contest against Bowling Green will have an audio broadcast live on WVUR (95.1 FM). Links for both, as well as live stats for both matches, will be available at www.valpoathletics.com.

Head Coach John Marovich: John Marovich holds a 36-31-15 record both overall and with Valpo in his fifth season at the helm of the Brown and Gold. Just the third head coach in program history, Marovich has the best winning percentage (.530) ever at Valpo, and ranks second in total victories.

Series Notes: Valpo and Western Michigan have met six times on the soccer field, with the Broncos holding a 5-1-0 advantage. WMU took the most recent matchup from the Crusaders on Aug. 31, 2003 in Valparaiso, 4-0. The Crusaders have taken on Bowling Green four times, with BGSU owning a 3-1-0 lead in the all-time series. But it was Valpo which downed the Falcons last year in Bowling Green, 4-0, on Sept. 18, as four different Crusaders found the back of the net.

Scouting the Opposition: Western Michigan enters Friday night’s game at 4-1-0 on the 2012 season, with its only loss coming in the season opener to nationally-ranked Illinois. Rachel Chaney has scored four of the Broncos’ 10 goals this season, while Michelle Watson has played every minute in goal and given up just five goals. Bowling Green is 1-4-0, its only win coming against IUPUI. Four different players have scored goals for the Falcons, who have been outscored 16-4 on the young season.

Staying Unbeaten at Home: After dropping a pair of road matches, Valpo returns home for two fixtures this weekend after starting the season 2-0-1 with a stretch of three home contests. That marks the longest unbeaten home stretch from season’s start since 2008, when the Crusaders won their first four home games en route to a 7-3-1 home mark on the season.

Switching Venues: Sunday’s game marks the first of the year on Eastgate Field for the Crusader women, which has served as their primary home pitch throughout their history. Valpo’s games this year are split evenly between Brown Field and Eastgate Field, as both venues will host five home games. Since ProGrass was installed on Brown Field prior to the 2008 season, the Valpo women have played 11 games on Brown Field and own a 6-4-1 record.

Iron Woman: Senior defender Janine Lytle has played every minute of each of Valpo’s five matches this season, but that is nothing new for the Crusaders’ back-line stalwart. In fact, Lytle, who has started all 63 games in her career, has only come off the pitch four times for a total of 31 minutes on the bench over her four seasons.

Desario Picks Up Another Goal: Senior Luisa Desario became the first Crusader player to score multiple goals on the season, finding the back of the net at Iowa in Valpo’s loss on Sunday. Desario, who also picked up the match-winning goal in the season opener against IUPUI, continues her march up the Crusader career charts in a number of categories, as she is now alone in fifth in career goals (16) and points (39) and tied for fifth in match-winning goals (6).

Ludwig Gets Off the Mark: Freshman Sarrah Ludwig became the first Crusader rookie to score a goal in 2012, and did so in a big way, finding the back of the net in the 85th minute for the match-tying goal in a 1-1 draw with Kent State on Aug. 24. The goal was the latest equalizer by a Crusader player since Kelly Faulkner scored in the 88th minute of an eventual 1-1 draw at Toledo on Sept. 10, 2004.