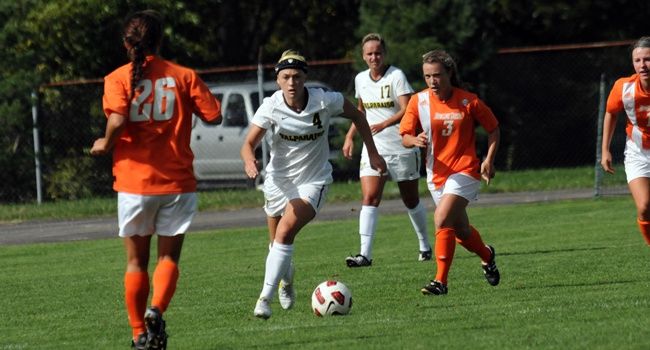 For the first time in program history, the Valparaiso women's soccer team is unbeaten through its first five home matches of the season, as the Crusaders scored three goals in the second half to defeat Bowling Green on Sunday afternoon, 3-0, at Eastgate Field.

The first half saw few chances for either side, as both squads tallied just three shot attempts, including just one shot on goal through the opening 45 minutes.  But with halftime nearing a close, inclement weather was picked up nearby both on the radar and with a lightning detector, necessitating that the teams retreated to their respective quarters to wait for the all-clear.

Following the 56-minute delay, the sides returned to the field for the second half, and Valpo came out a rejuvenated side.  The Crusaders out-shot Bowling Green over the final 45 minutes by a 12-5 count and put seven shots on goal to just one for the Falcons.

Valpo would take the lead in the 54th minute on a set play in its offensive end.  Sophomore Abby Kenyon (Canton, Ohio/Jackson), who started the second half in her first appearance of the season, took the ball on the touch line and unleashed one of her flip throw-ins, unleashing it long and into the center of the box.  Freshman Sarrah Ludwig (Downers Grove, Ill./South) was there to get up above the pack and head it into the back of the net for a 1-0 Crusader lead.

The Crusaders added a pair of goals on corner kicks within the final 10 minutes.  In the 81st minute, junior Tara Ellis (Portage, Ind./Portage) took a corner and placed it in the center of the six-yard box, where senior Janine Lytle (Wooster, Ohio/Wooster) headed it home for the insurance tally.  Then, less than three minutes later, Ellis put another corner deep into the box and Lytle’s header attempt was saved by BGSU goalkeeper Becca Ison.  But the rebound came right to the foot of freshman Jordyn Ryfiak (Rockford, Mich./Rockford), who easily put it away to cap the scoring.

Valpo ended the day out-shooting BGSU, 15-8, and boasted six corner kicks to the Falcons’ five.  Ison stopped five shots in the losing effort for Bowling Green, while junior Kristen Manski (Saint Charles, Ill./North) made a pair of saves to earn the shutout for the Crusaders, the 16th clean sheet of her career.

Valparaiso (4-2-1) is on the road for its next four matches, kicking off with a matchup at IPFW next Sunday, September 16.  Kickoff is slated for 5 p.m. CDT.