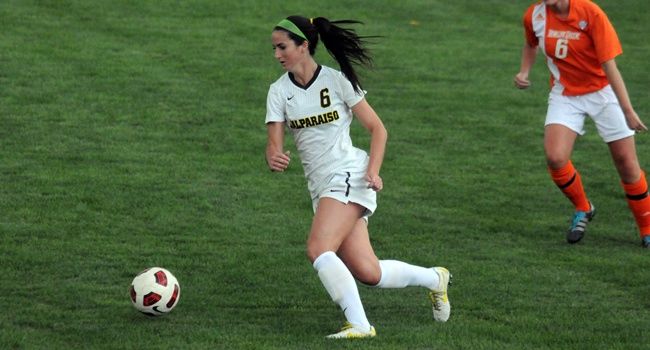 Valparaiso started its two-match California swing on Friday night by out-shooting host San Francisco 11-5, but unfortunately for the Crusaders, it was the Dons who found the back of the net for the game’s lone goal, as Valpo dropped a 1-0 decision.

"I think it was a very good game for us," said Crusader head coach John Marovich.  "This is the type of game that helps prepare us for league road games.  It was a great environment, and San Francisco is definitely a good West Coast Conference side.  It was just an unfortunate result - we missed some chances early in the game, and San Francisco caught us on a counter late for their goal."

Valpo surrendered no shots in the final 38 minutes of the first half to the Dons, and put the pressure on the home side, registering six first-half shot attempts, four of which were on frame.  Freshman Rita Craven (Frankfort, Ill./Lincoln-Way North) had perhaps the Crusaders’ best chance of the first half, getting behind USF’s back line, but her shot in the 20th minute was saved by Dons goalkeeper Emily Murzinski, one of four saves in the opening 45 minutes.

Senior Trisha Wladecki (Avon Lake, Ohio/Avon Lake) had a solid opportunity for the Crusaders in the 52nd minute to break the scoreless tie, but her header at the far post was wide of the frame and the game remained scoreless.  USF hit Valpo on a counter in the 74th minute for the only tally of the night, as Jaciara Mello fed Mackenzie Krieser, who put it across to the back post, where it hit the inside of the post and bounced in.  The Crusaders had a pair of efforts in the final five minutes in looking for the equalizer, but could not get either chance on frame.

Valpo ended the night with an 11-5 shot advantage and put four shots on goal to USF’s two.  Murzinski ended the night with the four saves, while Valparaiso goalkeeper Kristen Manski (Saint Charles, Ill./North) made one save in the losing effort.  The Crusaders also earned four corner kicks to the Dons’ two.

"I feel like it was an unfortunate result tonight, but I liked our intensity and attitude," said Marovich.  "We just have to be better in the attacking third - we have to be confident and finish off those chances.  All in all, I'm proud of the group, and we'll move past this and move on to the next game."

Valparaiso (5-3-1) looks to close the West Coast swing on a high note on Sunday afternoon, as the Crusaders take on their second WCC opponent in three days in the form of Saint Mary’s.  Kickoff is slated for 2 p.m. CDT, and live stats for the match will be available through www.valpoathletics.com.