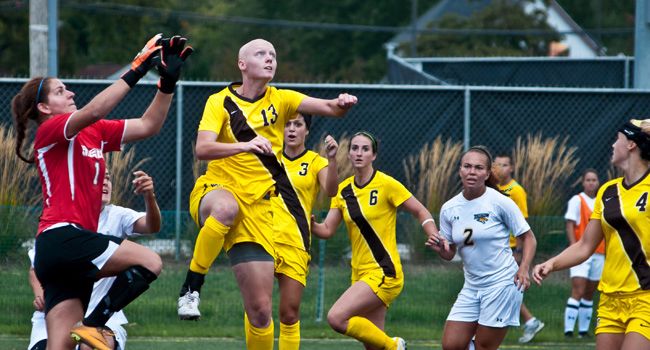 The Valparaiso women's soccer team barely let fans settle into their seats under the lights of Brown Field Tuesday evening before scoring, finding the back of the net just 65 seconds into the match en route to a 2-0 victory over Saint Joseph's (Ind.).

An early push forward resulted in a corner kick being awarded to Valpo less than a minute into the game, and the Crusaders took full advantage. Junior Tara Ellis (Portage, Ind./Portage) sent a perfect corner into the box, where freshman Sarrah Ludwig (Downers Grove, Ill./South) met it with a header at the near post to give Valpo a quick 1-0 lead. The goal, coming just 1:05 into the match, was the second-fastest tally to start a match in Crusader women's soccer history.

Senior Luisa Desario (Bartlett, Ill./Bartlett) created a number of quality offensive chances in the opening 45 minutes, including a 1-v-1 opportunity with the goalkeeper in the 16th minute which saw Puma goalkeeper Amanda Volk make a nice save to keep it a one-goal game. Desario's pressure finally paid off in the 36th minute, as some nifty footwork gave the senior an open crossing chance from the left side of the box. Her cross was met on the far side by junior Hailey Chmela (Hawthorn Woods, Ill./Lake Zurich), who sent it back across the frame inside the left post from six yards for her first career goal, putting the Crusaders ahead 2-0.

"We came out like we were supposed to tonight," said Crusader head coach John Marovich. "We earned an early corner by putting St. Joe's under pressure, and Tara sent a great ball in that Sarrah was able to get her head on and score to get us the early lead. I felt like started properly, felt we kept the ball well throughout the first half to go into the half up 2-0."

While Valpo wouldn't add to its side of the scoreboard, the Crusaders kept the pressure on, ending the night with 18 shots, 10 of which came in the second half. Meanwhile, the Crusaders surrendered just five shot attempts to St. Joe's (2-10-1), three of which were saved by freshman goalkeeper Sarah Silvasi (Dexter, Mich./Dexter) as the rookie earned a shutout in her first collegiate appearance. Volk ended the night with eight saves for the Pumas in the losing effort.

"This was a night we felt we could get some minutes to a lot of players who do a lot of tough work in training," said Marovich. "I thought those players did well in the second half to get some opportunities. Rachel Sheehan had a quality shot on goal, and we had a couple of other chances in front of the goal we just didn't put away. Overall, it was a good day for us, to get everybody a lot of minutes, and we're happy to get win number nine."

Valparaiso (9-4-1) closes out the regular season with four consecutive Horizon League fixtures, including a key matchup at Wright State this Sunday at noon. Live video of the game will be available through the Horizon League Network, with the link to the video and live stats up at www.valpoathletics.com.