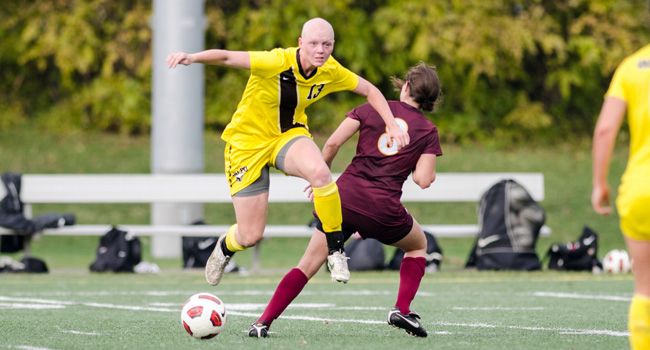 This Week in Crusader Soccer: The Valparaiso women’s soccer team closes out the 2012 regular season at Green Bay on Saturday afternoon. The Crusaders are currently in a battle in the middle of the league table, and could finish anywhere from third to seventh place, with the top six teams earning a spot in the Horizon League Championship.

Previously: Valpo earned a scoreless draw with Loyola Monday afternoon on Brown Field in a match rescheduled from the previous Wednesday. Prior to that, the Crusaders dropped a 1-0 decision to Youngstown State despite out-shooting the Penguins, 26-8.

Following the Crusaders: Fans can follow Saturday afternoon’s meeting with the Phoenix via live stats, available at www.valpoathletics.com.

Head Coach John Marovich: John Marovich holds a 43-34-17 record both overall and with Valpo in his fifth season at the helm of the Brown and Gold. Just the third head coach in program history, Marovich has the best winning percentage (.548) ever at Valpo, and ranks second in total victories.

Series Notes: Valpo is just 4-8-2 all-time against Green Bay, but all six positive results have come in their last six meetings. Included in that streak is a 1-0 victory at Eastgate Field on Sept. 16, 2011. Rachel Hoaglin scored the match-winner less than two minutes into the contest, off assists from Brooke Henderson and Catherine Terrell, while Kristen Manski made two saves to earn the clean sheet.

Scouting the Opposition: Green Bay enters Saturday’s game with a 5-10-1 overall record and sits at seven points in the league standings at 2-3-1. The Phoenix moved into contention for a berth in the league tournament on Wednesday following a 1-0 win at Loyola. Megan Braatz, who had the match-winner against the Ramblers, owns a team-high five goals on the season and also has tallied three assists. In goal, Katy Pilarzyk has seen the majority of the minutes and owns a 1.48 GAA.

Looking at the Standings: Valpo can still finish anywhere from third to seventh place in the Horizon League table with just one match remaining in the regular season. With a win against the Phoenix, the Crusaders would finish either third or fourth and host a quarterfinal game in the league tournament. Under most scenarios, the Crusaders would also host with a tie as the fourth seed. A loss would most likely send the Crusaders to the fifth or sixth seed and an opening-round road game, while the only scenario in which they would miss the postseason is with a loss, a YSU win over WSU, and a CSU win at Milwaukee.

Setting a New Mark: Junior goalkeeper Kristen Manski broke Valparaiso’s career shutouts record with the clean sheet against Loyola on Monday. The shutout was the 21st of her career, snapping the tie for first Manski was in with former Crusaders Erin Murray and Mele Cabral. Manski earned five shutouts as a freshman, seven as a sophomore and now has nine this season, just one shy of the Crusader single-season mark held by Cabral at 10.

Double-Digit Wins?: A victory on Saturday would mark the Crusaders’ tenth win of the 2012 campaign and would be the eighth time in the last 12 years that Valpo has reached the milestone of double digits in the wins column. The 2001 squad was the first Crusader team to win at least ten matches, and then six straight Valpo teams from 2004 through 2009 reached double digits in victories.

Offensive Leader: Senior Luisa Desario has paced the Crusader offense this season, entering the final game of the regular season with four goals and 10 points, both among the top-10 in the Horizon League. Desario is tied for fourth in Valpo history with 18 career goals and sits alone in fourth with 45 points.

Milestones: A pair of Crusaders recorded career firsts in the victory over Saint Joseph’s. Junior Hailey Chmela scored an insurance goal in the 36th minute for the first goal of her career. Meanwhile, freshman Sarah Silvasi made her first career appearance, starting in goal, and made three saves to ensure the clean sheet.

Playing Every Game: Valpo has maintained a fairly consistent starting lineup throughout the 2012 season, as six players have been part of the Starting XI every time out for the Crusaders. In all, 11 players have seen action in each of the 17 fixtures for Valpo this season. Meanwhile, Janine Lytle has not come off the pitch for a single minute this year, playing all 1592 minutes. In fact, the senior defender has been on the bench for just 33 minutes total over her four-year career.