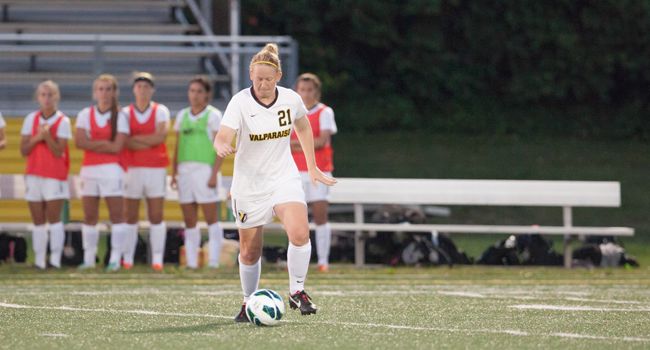 The Valparaiso women's soccer team posted its fifth shutout in seven games this season on Friday evening in Indianapolis, Ind., dueling to a 0-0 draw with IUPUI.

The Crusaders have now surrendered just two goals through seven fixtures in 2013, just one of which has come from the run of play. Senior Kristen Manski (St. Charles, Ill./North) has been between the posts for each and every second this year, making five saves in her latest clean sheet on Friday. The shutout was the 27th of Manski's career, moving the reigning Horizon League Defensive Player of the Week into a tie for second place in league history in the category.

"Obviously when you battle for 110 minutes, you'd always be happier to have gotten the win, but we have to look at the picture as a whole," said Crusader head coach John Marovich. "When you're on the road and continuing to put things together, you're not going to turn your nose up at a time, especially preparing for a hard league season. I thought we did a better job offensively, ending up with 19 shots. We want to be better with those chances in the attacking third, but to get that many chances is something we haven't done all year. We also got ourselves 10 corner kicks, and had some real good chances off those corners."

The scoreless draw saw Valpo have the better of the shots category in the opening half, as the Crusaders out-shot IUPUI (3-2-2) 8-5 in the opening 45 minutes and forced Giselle Guzman to make two saves. The Jaguars held a 9-6 edge in shots in the second half, with Manski having to make all five of her saves in that period. Perhaps the Crusaders' best chance came in the 63rd minute, as freshman Allegra Godfrey (Oshkosh, Wis./Oshkosh) sent a strike towards the right side of the goal, but IUPUI substitute goalkeeper Nicole Kulovitz dove to her left to push the ball around the post.

It was the Crusaders with a 5-2 advantage in shots over the 20 minutes of extra time, while Valpo also earned three corner kicks in the second overtime period. But neither side could get a shot on goal, as the game ended in a draw.

"I think the building process for this group is continuing forward," said Marovich. "Tonight, I'm really proud, because we had some good performances from players who had to step up because of injuries we're dealing with. Our process all year has been next woman up, and that's been something our team's been really good at. We were good again tonight - those people stepped up and gave us good quality performances."

Valparaiso (4-2-1) plays the back end of the weekend road trip at Evansville Sunday afternoon. Live stats for the game will be available through ValpoAthletics.com.