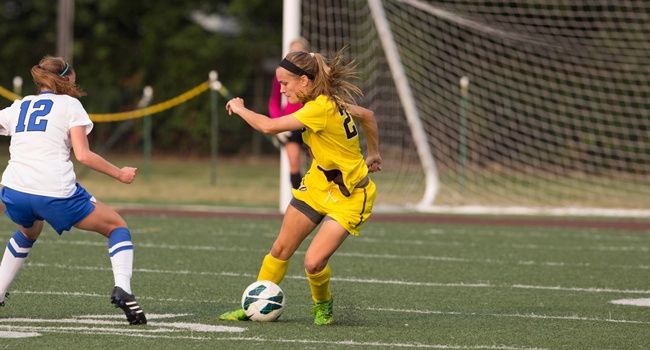 For the first time in over a calendar year, the Valparaiso women’s soccer team surrendered more than one goal, and despite pulling one back late in the game, the Crusaders fell by a 2-1 final at Evansville Sunday afternoon.

Valpo fell victim to a mis-clearance late in the first half, as in the 36th minute, Abby Springer was able to finish a cross from close range in the middle of the box to make it 1-0 Purple Aces.  The hosts doubled their lead a short time into the second half off a corner kick, as a volley by Bronwyn Boswell gave Evansville a 2-0 advantage.

The Crusaders were able to pull within one goal late in the second half on an individual effort by sophomore Jenny Fassbinder (Hudson, Wis./Hudson).  In the 85th minute, Fassbinder dribbled from the left side of the area into the middle of the field and struck a shot into the upper left corner of the net, eluding Evansville goalkeeper Simone Busby to pull Valpo back within 2-1.  The Crusaders would get one last shot in the final few minutes, but the effort was wide, as the hosts earned the win.

Evansville (5-2-1) out-shot the Crusaders on the afternoon by a 21-9 count and put nine shots on goal to Valpo’s three.  Kristen Manski (St. Charles, Ill./North) made seven saves to keep the Purple Aces at just two goals, while Busby made two saves to earn the win for Evansville.

Valparaiso (4-3-1) returns home for its final pair of non-league contests next weekend.  The Crusaders start the weekend by hosting Western Illinois at 7:30 p.m. on Friday evening, with live stats available through ValpoAthletics.com.