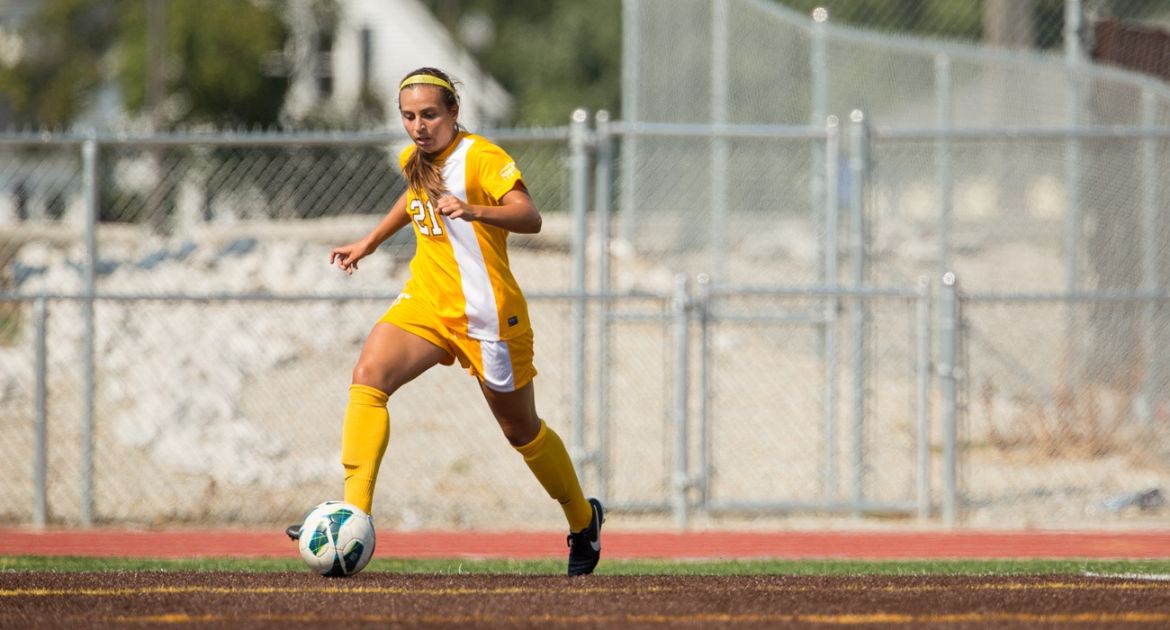 This Week in Crusader Soccer: The longest season-opening road trip in program history comes to an end this weekend for the Valparaiso University women's soccer team, as the Crusaders play two more road contests. Valpo will face Belmont Friday afternoon before concluding the stretch of five straight road games at Western Kentucky on Sunday.

Previously: Valpo earned its first victory of the 2015 campaign last Friday, as the Crusaders went into Miami (Ohio) and downed the fifth-ranked team in the region, 2-0. Rita Craven converted a penalty kick in the first half, while April Cronin tallied an insurance goal in the second half. Making her first start of the year in goal, Sydney Galvez-Daley earned the clean sheet with a pair of saves.

Following the Crusaders: Both matches this weekend will have live stats available through ValpoAthletics.com, while Friday's game will have a free live video broadcast from Belmont as well. The Western Kentucky match on Sunday will have a pay video broadcast. Over the course of the 2015 season, seven home matches will be broadcast live on ESPN3.com, while WVUR, Valpo’s student radio station, will also be broadcasting select matches.

Head Coach John Marovich: The 2014 Horizon League Coach of the Year, John Marovich holds a 67-47-24 record both overall and with Valpo entering his eighth season at the helm of the Brown and Gold. Just the third head coach in program history, Marovich has the best winning percentage (.572) ever at Valpo, and ranks second in total victories, just 11 wins shy of the top spot.

Series Notes: Belmont – Valparaiso holds a 2-1-0 advantage in the all-time series against the Bruins, but Belmont got the victory in the last meeting, downing the Crusaders 2-1 on Brown Field in the season opener last year on a goal in the 88th minute. That would be Valpo's lone loss of the season until the NCAA Tournament.

Western Kentucky – This marks the first meeting all-time between Valpo and Western Kentucky. In fact, the Crusaders have played just one match in program history against a current CUSA side - a loss at North Texas in 2004.

Crusaders Picked Atop Preseason Poll: The Crusaders were a unanimous choice to repeat atop the league table in 2015, according to preseason polling of the league’s head coaches. Valpo received all nine possible first-place votes, as head coaches were not allowed to rank their own team, to finish with 81 points. Oakland received the remaining first-place vote and was ranked second with 63 points, narrowly edging out Detroit with 60 points.

Looking Back at 2014: Last season’s Crusader squad was a record-setting side across the board, posting a 14-2-4 record, their 10th winning campaign in the last 11 years. The 14 wins marked a new program record, and the team set new marks for winning streak (12 matches) and unbeaten streak (18 matches) as well. The 2014 Valpo side became just the third squad in Horizon League history to post a perfect 8-0-0 record in regular season league play, as the Crusaders swept through the regular season and the tournament as well. Defensively, the squad set a new program best, surrendering just nine goals, while Sydney Galvez-Daley set new individual records for shutouts (12), wins (14) and GAA (0.43).

Finding the Back of the Net: After being shut out in their first two games of the season, it was only fitting that it was Rita Craven and April Cronin who got the Crusaders on the board for the season last Friday versus Miami (Ohio). The duo combined for nearly half (14) of Valpo's 29 goals last year - Cronin leading the pack by tallying nine goals, and Craven finding the back of the net five times en route to being named Horizon League Offensive Player of the Year. Craven now has nine career goals - eight of which have been match-winners, moving her into solo second place in the category in program history. Meanwhile, Cronin has scored 11 career goals, just one off Valpo's all-time top-10 in the category.

Just Like Riding a Bike: Following offseason surgery, junior goalkeeper Sydney Galvez-Daley missed the opening weekend of the season while continuing to recuperate. But returning between the posts for the Crusaders last time out, Galvez-Daley picked right up where she left off in 2014, securing the clean sheet in Valpo's win over the RedHawks by making a pair of saves. The junior now owns a 15-2-4 career record with 13 shutouts - third-most in program history - a 0.41 GAA, and an .888 save percentage.

Getting Players on the Field: While the Crusaders have maintained the same starting 10 field players through the first three matches of the season, most of the roster has seen at least some action over the first two weekends. 20 field players in all, as well as a pair of goalkeepers, have taken the pitch at least once in the Valpo uniform so far this year. That total of 22 players includes six of the nine newcomers to the program this season.

Craven Back For More: Senior midfielder Rita Craven returns for her final season already the most decorated player in program history. Craven was named as one of 28 players to the preseason MAC Hermann Trophy Watch List, the first Crusader ever to earn a spot on the watch list for collegiate soccer’s most prestigious award. Last year, Craven became the first player in Valpo history to earn All-American honors, as she was named an NSCAA Third Team All-American. In addition, she was an NSCAA First Team Scholar All-American, as well as the Horizon League’s Player of the Year and Offensive Player of the Year.

More Honorees Returning: Craven is far from the only player to receive honors for her work last season returning in 2015 for Valpo, however. All four of the Crusaders’ NSCAA All-Region honorees are back this year, as senior Jenny Fassbinder and juniors Cronin and Shelby Oelschlager were all Second Team All-Region choices. Both Fassbinder and Oelschlager started all 20 games on defense last year, while Cronin led the Crusaders with nine goals scored. Galvez-Daley is back as well, a Second Team All-League pick by the league and the league’s Defensive Player of the Year as chosen by College Sports Madness, while Vanesa Abad (6 goals, 1 assist) returns for her sophomore season after being named the Horizon League Freshman of the Year last year. In addition, Morgan Manzke – the 2013 Horizon League Newcomer of the Year – returns as well after using last season as an injury redshirt year.

Roster Breakdown: This year’s Crusader squad brings back 18 players from last season’s roster, 16 of whom saw action last year and eight of whom were regular starters. In addition, nine newcomers – one transfer and eight freshmen – join the fray as well.