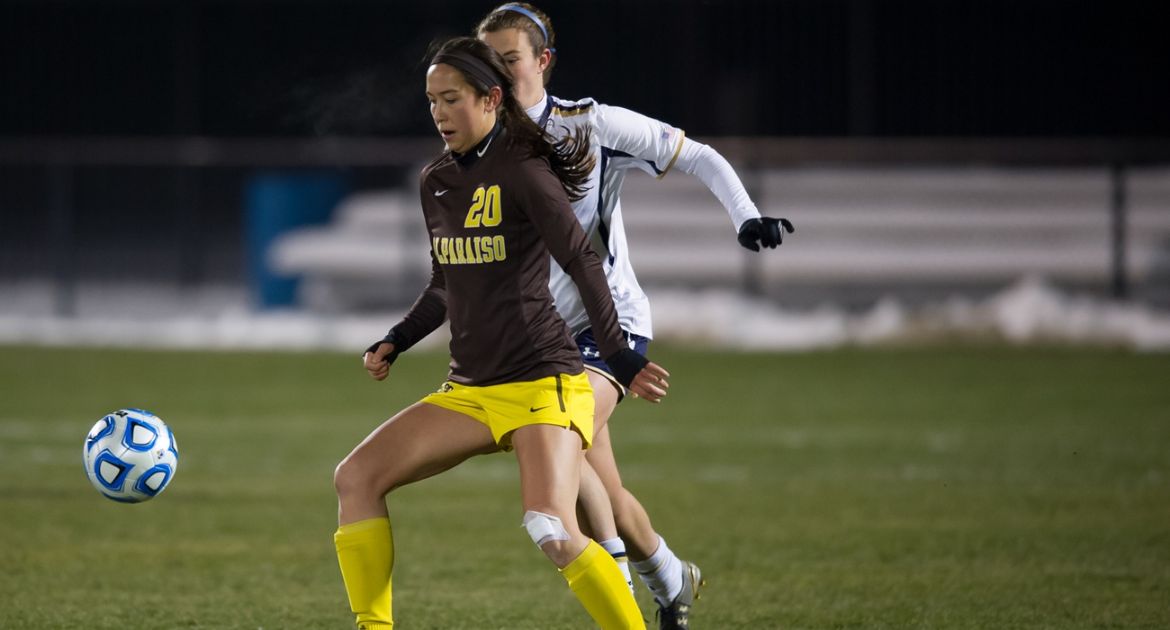 April Cronin scored her second goal in as many games Friday.
Valparaiso at Belmont | September 04, 2015

The Valparaiso University women’s soccer team peppered shots at the Belmont defense throughout Friday evening’s matchup in Nashville, but needed every single attempt, as the final of 27 shots resulted in a golden goal in the 101st minute off the boot of junior April Cronin (Glenview, Ill./Glenbrook  South) to give the Crusaders a 2-1 win.

"We're excited to be able to get a win on the road tonight," said Crusader head coach John Marovich. "I thought April's finish in overtime was quality - under the pressure in that circumstance, for her to put it away the way she did was very nice to see."

Valpo come out with a vengeance on Friday, pushing forward immediately and earning numerous attempts early on. The Crusaders tallied four shots and four corner kicks in the game’s first nine minutes, and then had an attempt from sophomore Vanesa Abad (Barrington, Ill./Lake Zurich [Ohio State]) cleared off the line by a defender in the in the 12th minute.

Despite the onslaught, it would take Valpo to the late stages of the first half to find the back of the net. A corner kick was taken by freshman Jordon Tindell (Jacksonville, Fla./Bishop Kenny) in the 37th minute which took a deflection in the box. The ball rebounded high in the air to senior Rita Craven (Frankfort, Ill./Lincoln-Way North), who knocked it home for the game’s first goal – her second goal of the season.

Belmont would equalize the game in the 61st minute, as Meg Howard assisted on an Allie Svoboda goal to make it 1-1. Despite continued pressure from the Crusaders, they were unable to find the match-winner in regulation – sophomore Sydney Gountounas (Tinley Park, Ill./Andrew) hit the post with a header in the 69th minute off of a corner kick, while Belmont goalkeeper Stephanie Bukovec made a pair of saves in the final five minutes of regulation to force extra time.

The first extra period went by scoreless, despite the Crusaders putting a pair of shots on goal, but it would take Valpo less than a minute into the second extra session to end the match on a positive note. Junior Robin Wenzel (Woodstock, Ill./Marian Central Catholic) fed a pass from the left side into the middle for Cronin. The pass and ensuing run onto it left Cronin one-on-one with Bukovec, and the junior calmly tucked away the golden goal for her second tally in as many games.

Valparaiso enjoyed a significant edge offensively over Belmont (1-3-0), tallying 27 shots to the Bruins’ 13. 17 of the Crusaders’ efforts were on goal, forcing Bukovez to make 13 saves for Belmont, while the Bruins were also credited with a pair of team saves. Junior Sydney Galvez-Daley (Chicago, Ill./Fenwick [Creighton]) stopped three shots in goal for the Crusaders as she won her second match in as many starts this year.

"I'm probably more excited about the way we started the game," said Marovich. "The first 20 minutes, we were quite energetic - we had some great chances early on, but our finishing was just a bit off. I felt like maybe we got just a little too loose in the 2nd half. But they're great lessons to learn as we go through our process, and to be able to find a way in overtime was fantastic."

Valparaiso (2-2-0) looks to return home to Brown Field above .500 as the Crusaders conclude their season-opening five-match road trip at Western Kentucky Sunday afternoon. Kickoff is set for 1 p.m. CT, with live stats available through ValpoAthletics.com.