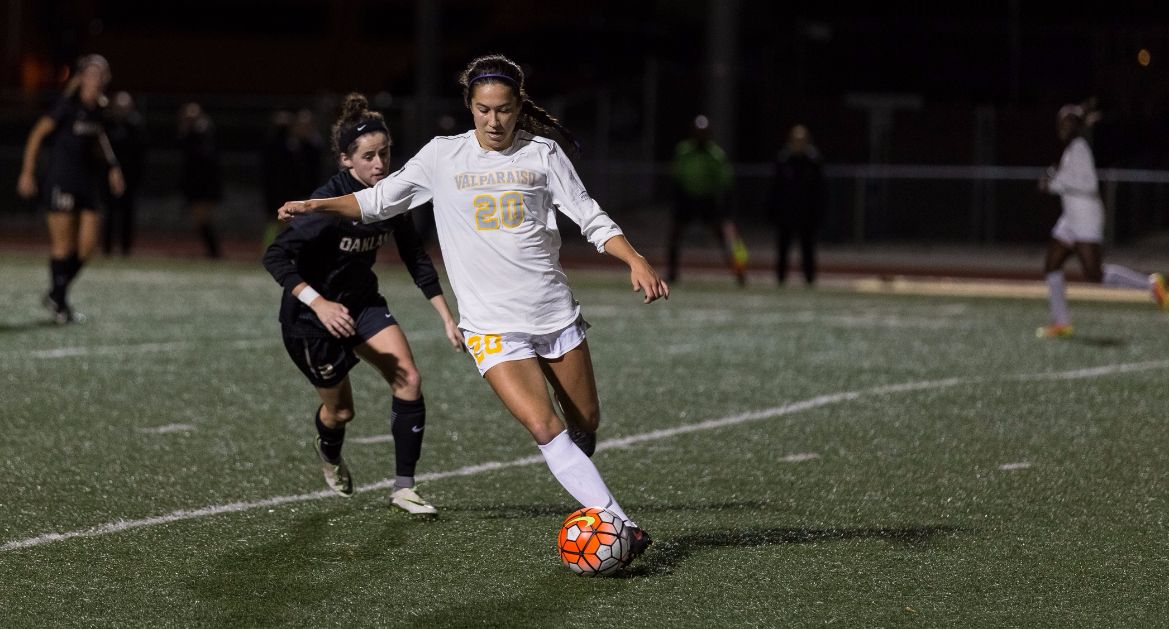 Next Up in Crusader Soccer: After finishing in a tie for fourth place in the Horizon League regular season standings, the Valparaiso University women’s soccer team opens up the 2016 Horizon League Championship Monday evening as the fifth seed, on the road at fourth-seeded Oakland.

Previously: Valpo clinched a berth into the league tournament with a 2-1 road win at Northern Kentucky in the regular season finale. Sophomore Cory Griffith tallied a pair of goals in a seven-minute span in the first half to give the Crusaders the lead for good.

Looking Ahead: Should the Crusaders advance to the semifinals, they would face either top-seeded Milwaukee or second-seeded Detroit Mercy in Milwaukee on Thursday, Nov. 3.

Following the Crusaders: Monday's match at Oakland can be seen live on ESPN3, WatchESPN and the ESPN app. Links for the live video, as well as live stats, will be available via ValpoAthletics.com.

Series Notes: Valpo is just 5-10-1 all-time against the Golden Grizzlies, while Oakland has won three of four meetings since it joined the Horizon League. This season’s regular season matchup came at Brown Field just over a week ago, with Oakland earning a 1-0 win on an own goal late in the first half.

Scouting the Opposition: The Golden Grizzlies enter the league tournament with an 8-9-1 overall record and finished in a tie for fourth place with the Crusaders, posting a 5-4-0 mark in Horizon League action. Oakland secured its spot in the tournament with a 3-2 win at home last Friday over Wright State. Sydnye Gagner has been involved in over half of the Golden Grizzlies’ goals, leading the team with eight goals while also tallying three assists. Alison Holland has seen most of the action in goal, posting a 1.05 GAA and four shutouts.

Brace For Success: Sophomore Cory Griffith picked up her third career brace and second of the season in the regular season finale, the biggest two goals of her career. With the Crusaders needing a win to assure themselves a spot in the league tournament, Griffith found the back of the net in the 24th and 31st minutes for both Valpo goals in the 2-1 victory. Griffith, who earlier this season tallied two goals in a win over New Mexico State, ranks second on the team this year with seven goals and 16 points – ranking sixth in the league in goals and 10th in points.

And With the Rest of the Winners…: With nine wins on the year and five match-winning goals from Griffith, that left four match-winning goals up for grabs, and senior April Cronin has tallied all four of those. Cronin, who most recently secured the winning goal in Valpo’s win at UIC, tied Valpo’s then single-season mark with four match-winners with the score against the Flames before Griffith broke the mark at NKU. The senior also now owns 10 career match-winning goals, matching Lori Moore for the most in a career in program history.

Among Valpo’s Most Prolific: Cronin will close her Crusader career as the second-most prolific scorer in program history. She has scored 25 career goals, second-most behind only Moore all-time as a Crusader, and has handed out 10 career assists, tied for fourth-most in program history. Her 60 points also rank behind only Moore all-time at Valpo. This season, Cronin owns eight goals and four assists, tied for seventh and ninth, respectively, on Valpo’s single-season charts in those categories, while she sits second in the league in goals and fourth in points.

Barrett Steps Into Goal: Pressed into action due to injury early in the season, redshirt freshman Tess Barrett has been solid between the pipes for Valpo all season long. Barrett enters the Horizon League Championship with a 7-6-0 record on the year and a 1.04 GAA, good for third in the league. She finished league play strong as well, posting a 4-3-0 record and an 0.87 GAA, surrendering one goal or fewer in seven of her eight starts in league action.

Marovich Sets Wins Record: The dramatic win over Milwaukee was extra-special for the leader of the Crusaders. Head coach John Marovich won his 79th career match with the victory over the Panthers, becoming the winningest coach in Valpo women's soccer history as he surpassed his predecessor, Stephen Anthony. Marovich, who now has 82 victories, also holds the program record for winning percentage by a head coach (.562).

Weekly League Honors: Griffith was tabbed the Horizon League Offensive Player of the Week on Oct. 3 for scoring the pair of match-winners over Milwaukee and Green Bay, becoming the third Crusader to earn the honor this season. Ava Porlier received the award earlier this year for her two-goal performance at Western Michigan, while April Cronin picked up the honor early on following a seven-point weekend - including her hat trick at Loyola. Entering this year, Valpo had not earned a Horizon League Offensive PoW award since the league split offense and defense in 2012.